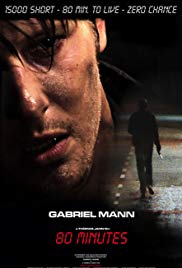 Storyline:
80 minutes to live or die. Alex got injected with a high tech poison by his creditor and put on a time clock to pay his debt back in 1 hour and 20 minutes. Will he make it or even further will he stay loyal to his friends and relatives under a pressure like running out of time?
Written by
Børge Frantzen
User Reviews: "80 Minutes" seems at first as if it will be a low-budget version of "Crank," but with an unexpected and fairly effective plot twist at the climax, it morphs into a low-budget version of an entirely different film, which I will not allude to, so as to avoid spoiling the surprise, other than saying it was an excellent film with first-rate talent. While 80M is limited by its budget, it manages to retain the moral and emotional B-story of the other film.

80M isn’t a great film, but it offers several satisfying plot twists, humor, witty banter and a lot of heart from its central characters. Production values are barely sufficient to convey the story. The three central characters deliver interesting performances, but many of the supporting characters lack depth. It’s not without its faults, but it has its moments.

Storyline:What happened on june 9? On a search for some harmless fun at the end of the school year, 17 year-old Derek boggman led his friends on a mischievous journey of caught-on-camera pranks. But on their quest to ...

Storyline:In the artist colony Rocket Perelman ten people strive to live their version of freedom and independence - everybody for themselves and all together. But that's hard work, since the joined theatre production...

Storyline:This dark psychological thriller draws us slowly but surely into Maria's strange world. Tension mounts as she is buffeted by interactions with her abusive husband, demanding father, and meek paramour. This h...