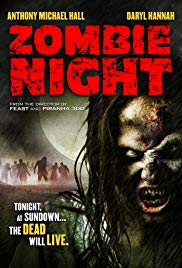 Storyline:
Zombies come out at night and two families must survive until morning.
User Reviews: I wasn’t going to write a review but I just wanted to comment on what one reviewer said.

He also mentioned about he couldn’t sit through 2 hours of the movies, well… he is right no-one could quite simply because the movie was only 85 minutes long lol.

Oh well, I have to say that Asylum do seem to make decent zombie movies probably because the other movies in this genre are usually very low budget and Asylums 1 million budget is one of the bigger ones compared to other Zombie movies so they tend to look quite good in comparison.

Anyway I do agree with one comment the reviewer made and that was Shirley Jones playing Nana was very annoying. Overall there was plenty going on in the movie, the Zombies were quite good even though the acting and story was little cheesy I was entertained.

That’s another Zombie/Infected movie seen and added to my ever growing list. 🙂