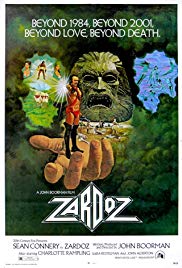 Storyline:
2293. Zardoz, an unseen “God” who speaks through an idol, a large stone statue of a head, leads a barbaric race called the Brutals, who live a harsh existence in the Outlands. Zardoz tells the Brutals that once they die, they will be transported to the Vortex, where they will live happily as immortals. He has armed a small group, the Exterminators, with guns, as Zardoz’s philosophy is that killing is good, and procreation is the root of all that is bad. In reality, Zardoz is Arthur Frayn, from a competing, more advanced race, called “the Eternals”, who live in paradise in the Vortex. The Eternals truly are immortal as they do not age and their bodies undergo reconstruction if they “die”. As such, they truly do not believe in procreation as their society has reached perfect equilibrium. Past human acts such as sex and sleep are obsolete in their advanced state. All major decisions are achieved through pure democracy. The Eternals, however, are not immune to non life threatening disease…
Written by
Huggo
User Reviews: I 1st saw this movie in 1975, at the Students Union all night "sci-fi" event and as it was so off the horizon I loved it. The word plays, picture plays and complex storyline at 3.00 am in the morning were extremely entertaining. The basic themes it pretends of elites vs worker slaves, the boredom of eternal life, the decadence of forced idleness, the pureness of the macho noble savage are all interwoven in a Midsummer Nights fantasy futuristic world. I have to explain it is "British" so the special effects were limited . However, this left the actors with parts to act. Quite simply Zardoz was great, especially the name and how it unfolds. This was despite the fact even then we knew who would eventually win.. and the Union cinema was not Dolby.

I saw it again in the 90’s and I was rather depressed, somehow my memory of great film was overwritten. It seemed so pretentious. John Alderton seemed fresh out of `please sir’, Sean Connery at bit too macho etc etc. The whole thing so terribly amateur. The cast of typecast British TV / Movie stars waffling through some clever student sci-fi 1984-cum-Brave New World thing, brought to screen with a bad script.. Mind you I thought similar things about `Oh Lucky man the 2nd time around. It was rather like seeing an old flame many years later somehow the chemistry was gone and perhaps love is blind.

I saw it again recently and well I think I have it back. (Perhaps with all these `cloning’ and `genetic-engineering’ stories being now topical). I seemed to have re-captured the initial feelings. I have thought about these two extremes: To enjoy this movie one needs to regain the feeling of being entertained by actors in a Play. Zardoz more like a fantasy play than a Sci-Fi movie. The imagery is excellent, the themes of immortals and mortals still a relevant possibility for the future. There are gaps that we need to bridge over with our own imaginations and yes we do have to get over the feeling that `Q’ will pop up as John Cleese.. But bridging that gap was nearly always the case in a play. Connery really does act, despite his costume.

The part with the crystal continues to excite my imagination. I still love the part in the old public library and his macho strutting don’t seem so out of place in a fantasy. The sexual chemistry with the immortal maidens doesn’t seem so sexist anymore. His character seems well fitted to the time and place and to me at least it is easy to believe his curiosity led him into the idol.

I think with these type of films , where you extend the script in your head, they are so different from the sci-fi / fantasy genre of today – you either love them or leave them. There is very little middle ground. So for a period piece that has not lost its charm. – Zardoz has place on my shelf of fantasy greats.

Storyline:An unnamed guy is a Dublin guitarist/singer/songwriter who makes a living by fixing vacuum cleaners in his Dad's Hoover repair shop by day, and singing and playing for money on the Dublin streets by night. A...

Storyline:In his remote Asian hideaway, the evil Fu Manchu plots the death and discredit of his archrival, Inspector Nayland Smith of Scotland Yard, as the first step in his plan to become leader of the world's most t...

Storyline:A young woman is invited by her girlfriend, who lives in an English country mansion, to stay there with her. The estate, however, isn't quite what it seems--and neither is the friend who issued the invitatio...