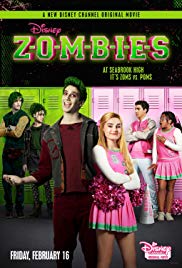 Storyline:
Disney’s “ZOMBIES” is a music and dance filled story set in the fictitious world of Seabrook, a cookie-cutter community brimming with perky conformity, 50 years after a zombie apocalypse. Today, the zombies pose no threat, but are required to live in Zombietown, an isolated, rundown community infused with their unique creative spirit. When zombies are finally allowed to enroll in Seabrook High School, the charming, charismatic zombie Zed, who is determined to play football, meets freshman Addison, who dreams of being a cheerleader – the ultimate form of status in Seabrook. Addison takes a lot of flak for befriending Zed and his zombie friends, but comes to learn that zombies and cheerleaders aren’t so different after all. Zed and Addison work together to show Seabrook what they can achieve when they embrace their differences and celebrate what makes them a community.
Written by
Disney Channel PR
User Reviews: Disney Channel Original Movies, are all the rage on the cable station, with epic promotion, marketing, and merchandizing to build up the film for your little ones. Back in the day, these movies actually did a decent job telling predictable stories, that held some suspense and impressive stunts in a variety of sports and disciplines. Since the new age of Disney though, these stories have taken a major hit in their quality, resorting to marketing gimmicks and dance numbers to do their lifting and dumping the story down the drain. After the success of Descendants, the studio that brought the villain prodigy tales to you, brings another movie to the small screen, in hopes of maximizing the ratings again. Robbie is back with another review on TV movies, so let’s get started, shall we?

The Message: Disney is taking some bold moves in their political statements, doing little to disguise the messages contained in the movie. Zombies is a flat-out statement about how wrong racism is, with the entire writing/cinematography set out to show the horrors of prejudice. The movie shows the various responses to the candor of segregation, and the right and wrong ways to fight all under the prowess of changing things that need to be changed. In addition, the movie has a strong focus on being yourself, learning to change things that are toxic about yourself, not because someone doesn’t like it.

The Leads: Milo Manheim and Meg Donnelly are the stars of the show, getting a majority of the camera time. Milo has a fresh energy about him, giving the movie that entertaining, fun quality you want in a DCOM. He manages to transition between silly and serious smoothly, never crossing into the realm of overacting. In addition to acting, his dance moves, singing, and ability to act like a savage, brain hungry monster are worth noting as well. Meg on the other hand is the strong, women protagonist that is the trend of Disney at the moment. While not wielding spears or martial arts that leave extra reeling in pain, Meg’s public speaking and political games are the highlights of her character’s ability. Like Milo, she has a good balance in her tones and acting style, alongside an impressive facial acting that speaks the emotions and tone of the scene. She injects energy at the right moments but stands as the symbol of hope/change in this installment. And in terms of singing, her harmony with the actors is astonishing and quite honestly my favorite voice of the group.

The Dance Numbers: The focus of this movie is obviously the musical numbers. What will most likely be a hot selling item, these numbers capture the energy and spirit of the movie. Unlike other musicals that focus on adjusting their styles to make a nice blend for the track, Zombies sticks to the major pop meets electronic beat. While not as dynamic, this allowed for some impressive choreography that brought in some breakdancing, some line dancing, and even more so the cheerleading flips and dynamics. These numbers work in the theme of the movie and again highlight the singing talents of our stars.

The Story: While the message is good, the story really took steps down in terms of quality. For one thing, the story isn’t unique, just a carbon copy of half of their stories, which are often diluted versions of classic movie stories. But ignoring this, the movie is not fleshed out very well with so many plot holes and stretches having to be taken to even semi-piece the tale together. The character development is rushed and sloppy, the love story fairly cheap and pathetic (when they aren’t singing), and the impasses are laughable as they resolve with little to no effort. It’s obvious that the focus was music, because much of this story looked for opportunities to introduce another song number, sacrificing key plot points.

The Other characters: Not everyone will fall into this dislike, but a large number of the characters are lame to put it as nicely as I can. These characters are those with extreme flaws/prejudice, who fail to move an ounce during the first 85 minutes and often present their grandiose ways in an overacted direction. I can’t tell how much of this is due to the direction and writing, but these characters are certainly some of the weaker ones to grace the Disney line up. Characters like Bucky and his squad in particularly are the worst, in terms of their inconsistency and presentation. And the parents of the crew/fans are only a couple of paces behind.

The Writing: This would explain a lot in terms of the other dislikes, but the writing was kind of shoddy in this film for me. Dialogue is limited in terms of anything unique, with only the anti-segregation lines holding any sustenance to them so you can get some mimicking from your kids started. Outside of that, I’ve already stated that the writing built everything around the dance numbers, leading to rushed plot lines, rapid character development that is almost nonexistent, and just poor planning in general.

Cheap Production: I know TV movies don’t have the biggest budget, but seeing as Disney is essentially the money maker of the world, they could have done better than this. Zombie’s stunts are not the greatest in terms of special effects, with many props looking snazzy, but very cheap. Sure, the light shows and setting look decent, but they can’t mask another big dislike, they couldn’t find another team/different uniforms to switch them into. You pay attention, you see that the football teams and cheerleaders are all the same. It’s not the fact that unique teams are key to a movie, it’s the laziness that the movie had when they have the means to go all out. In addition, beating the same team over and over, means again a lack of developing story/tension.

Lazy on Soundtrack: You just heard me say I like the soundtrack, so why on Earth am I putting this as a dislike. Simple, because half the track is unique and the other half are just reprisals that often pale to the first mix. Descendants, Teen Beach Movie, and even High School Musical do a nice job with keeping their tracks different, unique, and with as few remixes as possible. Zombies failed on this level, cheating the fans out of unique mixes just to cut some costs. Why Disney didn’t fun this DCOM more so, I don’t know, but it didn’t impress me in these regards. At least the numbers didn’t have those annoying, lazy lyrics like some tracks have had though… right.

Zombies, in my opinion, was a massively overhyped movie that promised a lot more than it delivered. I’ll admit it was fun at times, energetic, and a great medium for promoting anti-segregation (always a plus) and that the acting and dance numbers did their jobs. However, this installment makes me fear tor the future of DCOMs if all they focus on is the music and the merchandizing that will follow. This team cut a lot of corners, shucking originality, deeper development, and meaningful dialogue and comparing it to other DCOMS that remain hidden in their vaults, it’s sad. I’m hoping they will utilize the star actors and the supporting zombies in future projects, but the company needs to get their act together if they plan to keep their DCOMS from further plunging down into crappy depths.