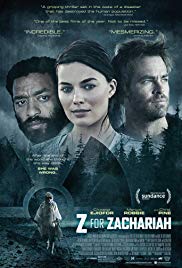 Storyline:
In the wake of a disaster that wipes out most of civilization, two men and a young woman find themselves in an emotionally charged love triangle as the last known survivors.
User Reviews: "Z For Zachariah" (2015 release; 95 min.) brings the story of a couple of survivors of an unidentified contamination or radiation. As the movie opens, we see someone with a protective mask going through an empty town to pick up various things, including books from the library. When later the person takes off the mask, we see it is a young woman, named Ann. Ann and her dog live on their own, tending to the land and surviving as best they can. Then Ann runs into another survivor, a man named John. When John inadvertently takes a swim in a contaminated lake, he becomes very ill. Ann takes him home and nurtures him back to health. At this point we are 15 minutes into the movie, but to tell you much more of the plot would spoil your viewing experience, you’ll just have to see for yourself how it all plays out.

Couple of comments: first, the movie’s end titles say that the is "Based on the book by Robert O’Brien", but it would have been better to have said "very loosely based on/inspired by Robert O’Brian’s book", as the plot for this film version differs dramatically and almost unrecognizably from the 1974 book. Since it is featured openly in the movie’s trailer, besides Ann and John (the two characters in the book), the movie introduces a third character, Caleb. Second, while the setting of the movie is post-apocalyptic, the movie really doesn’t feel all that much sci-fi. It’s just three characters playing out their lives in an unspecified location somewhere in the US. In fact, the movie feels just as much being a Nicolas Sparks-like romantic drama than it is a sci-fi movie. Other elements featured in the movie include religion, and race. Third, the acting performances are strong. Up-and-coming Aussie actress Margo Robbie (also in The Wolf of Wall Street) does great work. She is definitely going places, that much is clear. Chiwetel Ejiofor and Chris Pine play John and Caleb, respectively. Fourth, the movie was mostly shot on location in New Zealand, with some additional shooting in West Virginia. Gorgeous sceneries most of the time. Last but certainly not least, there is a very nice orchestral score, composed by Heather "The Instruments" McIntosh.

I had been looking forward to seeing this movie, and it finally opened this weekend at my local art-house theater here in Cincinnati. The matinée screening where I saw this at was attended okay but not great. If you are in the mood for a romantic drama with a slight sci-fi twist, you’ll definitely want to check this out. On the other hand, if you read and loved the book, you will absolutely want to avoid this.

Storyline:When Davis, a vividly daydreaming 17-year-old Aussie male, enters his new American high school (one rife with chowderheads steeped in the lore of the Twilight books and films), Caitlyn, the school's most pop...