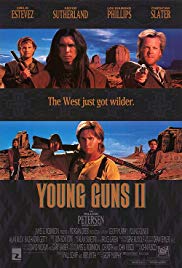 Storyline:
Billy “The Kid” and his gang are wanted by the law, and when “Doc” Scurlock and Chavez are captured, Billy has to save them. They escape and set south for Mexico. “Let’s hire a thief to catch one”, John S. Chisum said, so he paid Pat Garrett, one of Billy’s former partners, $1000 for the killing of William H. Bonney aka Billy “The Kid”.
Written by
Lars J. Aas <[email protected]>
User Reviews: This is the sequel to successful film titled ‘Young Guns'(1998 , by Christopher Cain) with similar players and concerning about Billy and his band heading toward the Old Mexico and pursued by a posse. Revisionist and contemporary study about William Bonney, alias Billy the Kid . Billy(Emilio Estevez) became a cowboy in Lincoln County (New Mexico) for cattleman Tunstall allied to Chisum (James Coburn) , but Tunstall is killed and started the Lincoln County war against Murphy as main enemy . Billy seeks revenge for his death and he converted an outlaw and nasty gunfighter with a price on his head . Then Billy along with a young group (Kiefer Sutherland, Christian Slater, Lou Diamond Phillips , Balthazar Getty) have their own ethic codes and undergo a criminal spree . The bunch is besieged but they went out firing his gun and made his escape . However , the Kid was caught and convicted of killing and sentenced to be hanged ; though shackled foot and hand , he managed to getaway from prison by shooting dead the deputies (Leon Rippy) guarding him. Pat Garret( William H Petersen), a former friend, was elected sheriff and set off in pursuit to capture him and on 1881 tracked at Fort Sumner and there shot him dead by surprise. It is said that Chisum was instrumental in making Billy the Kid an outlaw killer, he used his considerable influence in getting Garret elected Sheriff of Lincoln County in 1880 and it was Pat who hunted down and killed the young outlaw . Garret and his gang pull off a hot chase against the outlaws. Legend says that Billy murdered 21 men in his 21 years of life but is really thought to be much less. After Pat Garrett was not reelected sheriff of Lincoln County, however he was commissioned a captain in the Texas Rangers. On 19 February 1908 he was driving his buggy on a lonely desert road, he stepped down to urinate and was shot in the back by a hired killer. A man stood trial for the murder but was acquitted. Controversy still surrounds the end of Pat Garrett .

This is an in interesting look about the known story of the West’s greatest bandit. Contemporary-style Western with acceptable performances and professional direction by Geoff Murphy who creates some good action scenes. The Kid is well played ,though sometimes overacting , by Emilio Estevez, he plays as a likable, sympathetic, attractive young and favourite with girls. This passable Western packs lots of action, shootouts, and explosive violence . Taut excitement throughout, beautifully photographed and with spectacular bloodletting but realized with some flaws . The story is exactly like ¨The young guns I¨ with loads of noisy action and violence. The film gets spectacular shoot em’up , thrills , exciting horse pursuits ; it’s entertaining , although nothing new but displays an ordinary pace and with no originality . The movie contains some moment of grisly violence and even touching on the relationships between the fugitives . Colorful and great cinematography by Dean Semler. Modern and unfitting musical score by Alan Silvestri with songs by Jon Bon Jovi. The motion picture will appeal to Western fans.

Storyline:Cheech and Chong work briefly as car wash attendants and musicians before being hired to drive a car from Chicago to Las Vegas. Unbeknownst to them, their employers (themselves in double roles) have conceale...

Storyline:Jonah Hill plays Michael Finkel, a recently terminated New York Times journalist who's struggling for work after a story gone wrong. One day, he receives a phone call from a man regarding an FBI Most Wanted ...

Storyline:On a remote Caribbean island, Army Ranger Joe Armstrong investigates the disappearance of several marines, which leads him to The Lion, a super-criminal who has kidnapped a local scientist and mass-produced ...

Storyline:Have you ever been in a bad mood, turned on your favorite song and just felt better? Have you attended a group meditation or yoga class where they played sacred sound instruments, and you left feeling re-ene...

Storyline:A veteran of World War I marries and settles happily into a tidy, humble life until an accident brings back memories of a former life of wealth and privilege while blocking all recollection of his existence ...