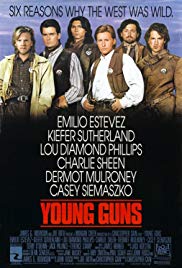 Storyline:
1878 in New Mexico: John Tunstall picks up young gun men from the road to have them work on his ranch, but also to teach them reading and to civilize them. However he’s a thorn in the side of the rich rancher Murphy, as he’s a competitor in selling cattle. One day he’s shot by Murphy’s men. Judge Wilson can’t do anything, since Sheriff Brady is one of Murphy’s men. But attorney Alex persuades him to constitute Tunstall’s young friends to Deputies and give them warrants of arrest for the murderers. Instead of arresting them, William Bonney just shoots them down. Soon the 5 guys become famous and William gets the name “Billie the Kid” – but they’re also chased by dozens of Murphy’s men and the army. The people however honor him as fighter for justice.
Written by
Tom Zoerner <[email protected]>
User Reviews: Its easy to pass off Young Guns as an eager to please piece of throwaway rock video style entertainment aimed at the younger demographic but that would be unfair.The thing is,it knows what it wants to be and it does it very well.The young cast all perform with great fun and energy thus enriching the film immeasurably.They are well supported by Jack Palance and Terrence Stamp who bring weight to proceedings, particularly Palance who seems to revel in his hammy role.Emilio Estevez’s interpretation of Billy The Kid is a great watch too,his realisation of the character may be a million miles from the reality but when there’s this much fun being had on screen,who cares!? The music in the film is a little jarring in places,electric guitars screaming Van Halen style over a western horse chase feel very much out of place but its never distracting enough to take you out of the fun. So in summary Young Guns is a western that wants to entertain you and I say it succeeds well.It was never intended to be a Sergio Leone classic western,just a fun ride with characters you can root for.On that level,it is a triumph.

Storyline:In 1954 during the final days of French military involvement in Indochina French Army Colonel Pierre-Noel Raspeguy is leading his paratroopers in the decisive battle of Dien Bien Phu. A weakened French garri...

Storyline:On Homecoming night, Samantha, Gina, and Mindy are having a slumber party at Sam's house due to being black-listed by the sexy football players. Since the dance and game are out of the question, the trio sta...

Storyline:Mike is released from psychiatry, when he agrees with the doctors that the terrible happenings in his past were just in his imagination. But once he's free, he contacts Redge and they team up to hunt down an...

Storyline:A tough female ex-cop-turned-bounty hunter goes after the gang of a crazed killer who murdered her partner.User Reviews: Absolutely mindless action, no character development, and not so splendid acting, perm...

Storyline:Paul Robaix is a well known director, married to Lucy Dell, a famous movie star. Robaix wants to make a movie of the classic play Madame Butterfly, but he doesn't want his wife to play the leading part, as i...