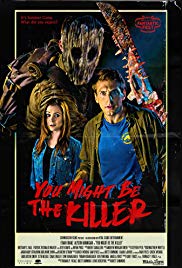 Storyline:
A camp counselor suffering from blackouts finds himself surrounded by murder victims. He turns to his horror movie enthusiast friend for advice, and to contend with the idea he may be the killer.
User Reviews: Attempting to get to safety, a man in the middle of a serial killer’s rampage recounts the events that lead to the spree to a friend only to find that telling the story reveals more and more clues that he’s the killer and must find out what’s happening and who’s responsible before it’s too late.

While problematic, this one still offers up enough to like. One of the stronger aspects to this one is the unique and highly creative storyline that offers a different take on the movie-within-the-movie approach. Taking the idea of trying to recount what happened in order to convince a friend what’s going on by doing the flashbacks to the rampage against the rest of the campers, there’s a light tone to the proceedings which is enhanced by the various stalking scenes that play out here. Going with the notion that he’s reliving the incidents due to the masks’ influence, the film has plenty of stellar action scenes here with the encounters at the swimming pool, the scenes at the mess hall and the chase through the woods where it features the killer tracking the stragglers through the trees and snatching them at pretty inopportune times where everybody is distracted by everything going on around them and making the killers’ antics all the more surprising. Leading into the big finale which is the chase sequence that brings about the fun double-crosses and tense stalking throughout here, the way this setup deconstructs the usual slasher film antics gives the film a wholly enjoyable and intriguing finish that really is the most enjoyable part. Considering this is mostly accomplished through the phone-call interactions that adds some well-deserved comedy alongside the gore to hold up this one over its flaws. Among the problematic areas are the meta-happy nature of the film which accounts for the humor present. The idea of typing out the deaths on-screen to keep track of what’s happening, recapping the similar nature of movies featuring familiar setups to the situation and using their knowledge of the movies to make sense of what’s going on might be somewhat distracting and get really old for some out there. This isn’t a tactic which really will be divisive as there’s very little need for it to be included yet the ingenuity might be appreciated although that does force the issue of the scattered and divisive narrative here. Since it jumps back-and-forth from the beginning of the rampage to the end and then back into the middle in various time-points of the night, this is just utterly confusing and doesn’t make any kind of linear sense which is quite difficult if not outright impossible to determine what’s going on. As none of the flashbacks are shown in a linear format either, there’s an incredibly unfocused feeling to this that really becomes apparent the more subplots are introduced that just derail everything.