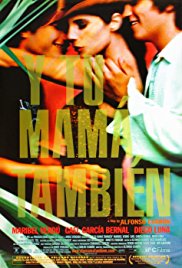 Storyline:
In Mexico City, late teen friends Tenoch Iturbide and Julio Zapata are feeling restless as their respective girlfriends are traveling together through Europe before they all begin the next phase of their lives at college. At a lavish family wedding, Tenoch and Julio meet Luisa Cortés, the twenty-something wife of Tenoch’s cousin Jano, the two who have just moved to Mexico from Spain. Tenoch and Julio try to impress the beautiful Luisa by telling her that they will be taking a trip to the most beautiful secluded beach in Mexico called la Boca del Cielo (translated to Heaven’s Mouth), the trip and the beach which in reality don’t exist. When Luisa learns of Jano’s latest marital indiscretion straight from the horse’s mouth, she takes Tenoch and Julio’s offer to go along on this road trip, meaning that Tenoch and Julio have to pull together quickly a road trip to a non-existent beach. They decide to head toward one suggested by their friend Saba, who seems a little confused himself of …
Written by
Huggo
User Reviews: This is a very different Mexican film. One in which you can really appreciate the sure hand of director Alfonso Cuaron working at the top of his form with an excellent group of actors, which proves that when someone of this magnitude decides to make a good film about interesting characters in contemporary Mexico, one can expect a fine finished product.

Alfonso and Carlos Cuaron have created people and situations that are very believable. The script is fine. "Y tu mama tambien" is about awakening and about reaching maturity. It’s a great Mexican Road movie done with a lot of care.

The Cuarons shows us a slice of life that could happen, not only in that country, but one that is universal. Producers and directors in Mexico should see this film and learn how to do future movies, even though the popular taste runs into the horrible soap operas, popular in Mexican TV. The Cuarons have turned out a magnificent script and have turned away from those popular melodramas that are a staple of the film industry of our neighbor to the South.

Gael Garcia Bernal, who was excellent in Amores Perros, here demonstrates once again what an actor can do, given the right scenario and obviously a lot of freedom to give life to Julio. Diego Luna is also very credible in his portrayal of the son of a rich man on the road to discover himself. Obviously, the underlying theme is that both like each other, but it never comes out, as they both are so closeted and think themselves of being straight in such a macho atmosphere.

Maribel Verdu plays the pivotal role of Luisa. She sees right through the boys, but has to play the part since they are the salvation from her miserable marriage. Here as in other Spanish films, she lets us know she is an actress who likes to take chances. This was the right vehicle for her and she takes advantage of a role that makes her outshine the rest of the cast.

One can only hope more interesting things coming from this director and Mexico’s gain is our loss, as it’s obvious Mr. Cuaron’s incursion into American films have not been as satisfactory as his work here.

Storyline:A retired priest hunted by his sins is pulled back into darkness when a friend begs him to help his possessed daughter.User Reviews:

Storyline:Metropolis is a visually stunning, rich, and memorable pleasure. It's contributors have brought us other classics such as Astroboy and Akira. The story takes place in the muti-leveled, fascinating, megalopol...

Storyline:A drug dealer finds an unlikely traveling companion in a runaway kid trying to dodge social services.User Reviews: I found this almost impossible to watch at the start. So sad and depressing that I actually ...

Storyline:Billie Frank is a shy, young multiracial girl who is sent away by her alcoholic mother at a very early age. At an orphanage, she befriends Louise and Roxanne. Flash forward to 1983. Billie and her friends ar...