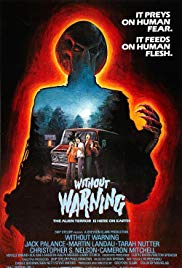 Storyline:
Sandy and Greg are two teenage kids going camping with their friends in California. Their plan is to go to the lake in town, and despite warnings from the creepy town gas station owner, Joe Taylor, the kids go camping there and end up separated from each other. Greg and Sandy team up with Taylor to save the town, but unfortunately for them, Taylor is rather eccentric and fixated on hunting down the hostile alien threatening them, and a former Vietnam war veteran, Fred Dobbs, is convinced that Sandy and Greg are the aliens.
Written by
GasmaskProductionsBooks
User Reviews: Without Warning is kinda odd, what with it’s "big budget" stars and all. It’s nicely done, although it looks like a Kolchak/Night Stalker episode.

However, the little frisbee/alien/thingies are extremely creepy, and strike me as very effective considering the low-budget.

The alien "hunter" looks like they got the costume from Outer Limits.

Overall, I’d recommend this movie, despite the hammy performances. Turn the lights down and prepare to be creeped out.

Storyline:The Australian rock band AC/DC performs User Reviews: This is without doubt one of the absolute classics when it comes to live performance videos. Filmed at a smaller (by comparision of todays standards) ven...

Storyline:When she takes up her new post at an eerie convalescent home deep in the French countryside, nurse Martine (Isabelle Goguey) soon discovers that several missing co-workers may have fallen prey to an unspeaka...