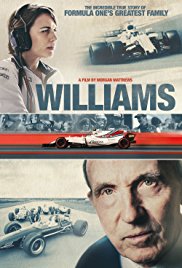 Storyline:
Charting the story of Formula One’s most celebrated family, Williams is a thrilling account of how one man built a racing empire and a vivid, heart-rending portrait of the aftermath of a tragedy. Starting life with nothing other than a single-minded obsession for speed, Sir Frank Williams created one of the world’s most enduring Formula One racing teams, winning nine Constructors’ Championships over the last 40 years. But in 1986 at the height of this success, a near fatal car accident left Frank fighting to survive and the team’s future hanging in the balance. Williams, a brand-new documentary from BAFTA-wining director Morgan Matthews, tells the story of Frank’s rise to fame and how his family battled to keep him alive and the team afloat after the crash that left Frank wheelchair-bound for the rest of his life. Featuring heart-pounding racing footage, interviews with much-loved Formula One stars (including Sir Jackie Stewart, Nigel Mansell, Alan Jones and Sir Patrick Head) and …
Written by
Curzon Artificial Eye
User Reviews: Definitely one of the best documentaries I’ve seen in a while. As a big fan of Formula 1 i couldn’t wait to see this one since I realised that I actually don’t know much about Frank Williams’ life. And what a life this man had. From being obsessed with racing as a young man he did everything in his power to get to the top and it wasn’t an easy way. He overcame many struggles which is truly inspirational.

This film goes quite deep to show us the relationships between the Williams family members. It carries quite an emotional punch but without ever being overly sentimental.

If you are a true Formula 1 fan you will definitely enjoy this and if you are not you will enjoy it as well since the story of Frank Williams can inspire people from all walks of life.