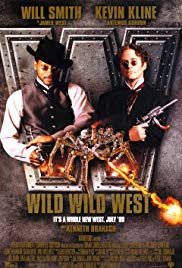 Storyline:
Jim West is a guns-a-blazing former Civil War hero. Artemus Gordon is an inventive U.S. Marshal who excels in disguise. When the United States is threatened by psychotic Confederate Arliss Loveless, President Ulysses S Grant teams the duo up to bring him to justice. On a hazard-packed train journey from Washington, D.C. to Utah, West and Gordon must combine their skills to best Loveless and his diabolical machines.
Written by
Chris Turner <[email protected]> and J. Kyle
User Reviews: I like Will Smith and his movies. I enjoyed ENEMY OF THE STATE, INDEPENDENCE DAY and even MEN IN BLACK. So I watched WILD WILD WEST for tradition’s sake, I guess you can say. It was 1999’s July 4 Will Smith hit. I am positive that this is the worst I have ever seen Will Smith in. I tried to enjoy this movie, and at parts I did, but most of it was lame and not very enjoyable, I’m sorry to say.

Dr. Arliss Loveless, (Kenneth Branagh) a confederate rich bad guy is trying to sell parts of the USA to the highest bidding countries, using his giant machines of destruction (walking mechanicals spiders and stuff) to take hostage of President Ulysses S. Grant (Kevin Kline). The two best agents the U.S. Government has, James West (Will Smith) and Artemus Gordon (also Kevin Kline) are sent to stop Loveless and save the president, as well as the country. West also has a personal score to settle with Loveless, since he was responsible for the death of his parents. The beautiful Rita Escobar (Salma Hayek) tags along to try and save her father, who is also being held hostage by Loveless. She attracts the eye of Gordan and West.

The acting jobs in this are fair, but the writing spoils it. The gorgeous Salma Hayek is underplayed, and her character is pretty much pointless except to have a good-looking girl in the movie. Both Will Smith and Kevin Kline do fairly good jobs acting, but the characters are too boring to enjoy. I’m not sure if Kenneth Branagh or the writing is responsible for the incredible stupid and annoying Dr. Loveless.

This movie is very similar to Men in Black, only less modern and on a smaller scale. (save the country, not the planet) Another big difference between the two was that Men in Black was more fun, cooler, and had better characters, villains and gadgets (not to mention Tommy Lee Jones). If you are in the movie for a Will Smith movie, go rent ENEMY OF THE STATE. If you’re in the movie for a lighter Will Smith movie, go rent MEN IN BLACK. I’d try to avoid WILD WILD WEST, but give it a try if you like.