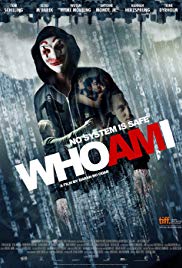 Storyline:
Benjamin (TOM SCHILLING) is invisible, a nobody. This changes abruptly when he meets charismatic Max (ELYAS M’BAREK). Even though they couldn’t seem more different from the outside, they share the same interest: hacking. Together with Max’s friends, the impulsive Stephan (WOTAN WILKE MÖHRING) and paranoid Paul (ANTOINE MONOT), they form the subversive Hacker collective CLAY (CLOWNS LAUGHING @ YOU). CLAY provokes with fun campaigns and speaks for a whole generation. For the first time in his life, Benjamin is part of something and even the attractive Marie (HANNAH HERZSPRUNG) begins noticing him. But fun turns into deadly danger when CLAY appears on the BKA’s (Bundeskriminalamt, Federal Criminal Police Office) as well as Europol’s most wanted list. Hunted by Cybercrime investigator Hanne Lindberg (TRINE DYRHOLM), Benjamin is no longer a nobody, but instead one of the most wanted hackers in the world.
Written by
Wiedemann & Berg Film
User Reviews: Even though I live in Germany, it’s been years since I have watched a German movie. The local cinema and made-for-TV movie market is saturated by cheaply produced romcoms and documentary-style WW2-movies. ‘Who Am I’ caught my attention with its very different theme. And it turned out being a very enjoyable watch. The first interrogation theme felt a bit overacted and over-directed to me and made me worry if they would try to hard to be "cool and different", but luckily the movie quickly found a good pace and well-balanced direction. It moves at a fast pace, with quite some jumps forth and back in time, but the director keeps it well structured, so that the audience doesn’t get lost in the twists and turns. The visual effects are very well done, I especially liked the visuals of the ‘dark net’, depicting the online interaction between hackers as scenes in an underground train. There are some minor plot holes, and I found myself able to guess some things which would happen next, but the end of the movie will manage to surprise most viewers (now, how often can you say that any more?), and the fast pace and compelling characters (throughout well acted) will keep you hooked. This isn’t a groundbreaking movie, but I see good potential for it to draw the attention of an international audience, which hopefully will lead to some more German movies in he near future who also dare to address unusual themes.

Storyline:Luisa is a 20-year-old law student from Mannheim, Germany. As the political right rises in popularity, Luisa joins Antifa, through her friend Batte. She starts to live in a commune, where she meets Alfa and ...

Storyline:How intelligent is artificial intelligence? Should we welcome it or fear it? Might it help humanity with its problems? And if so, to what extent? This documentary pursues these questions, while providing inf...

Storyline:When the Bell Rings tells the story of David 'Dino' Wells, a 40 year old former boxer who makes a gutsy attempt to return to the fighting. As Wells undergoes intense training in order to shape up, he's torme...

Storyline:Two women descend into madness after an alleged meteor strike sets off a series of strange events in their town of Troy, N.Y.User Reviews: I felt as though I was tricked into watching this mess of a "mo...

Storyline:Since the fall of the Iron Curtain an estimated four million children have found themselves living on the streets in the former countries of the Soviet Union. In the streets of Moscow alone there are over 30...