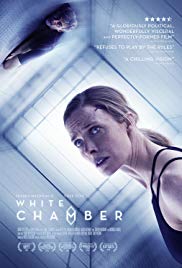 Storyline:
The United Kingdom. Soon. Civil war rages. A woman wakes up in a blindingly white cuboid cell. Using its sophisticated functionality, her captor tortures her for information; information she claims not to have – or does she?
User Reviews: A fairly basic story that has been explored in other films, unfortunately weighted down by an unsubtle political message poorly communicated.

The acting is good, the production values high and dialogue well delivered despite the bland script. I feel the actors really working hard to make the film gel, which makes it more the pity that it doesn’t. After an hour of gratuitous torture I felt like the person in the box.

The experience wasn’t going well and this gave me too much time to ask myself where this film was going? It was going nowhere…

This one is going to sink without trace having failed in its social message. What one is left with is an over articulated cerebral video nasty.

Storyline:In a rain swept Tokyo, Eko complicates her life by publishing a 'Call For Dreams' ad in a newspaper. As strangers leave descriptions of dreams on her answering machine, a parallel police investigation of a m...

Storyline:Victoria Robinson seems to have a perfect life. But her unfaithful husband and a sexy younger man with dark motives will lead her into a dangerous game of cat and mouse where she’ll discover that the perfect...

Storyline:Some ground subsidence has occurred in a suburban area and a team of engineers, including Hao, is dispatched to investigate the cause. After days of wandering around in the empty suburb looking for answers a...