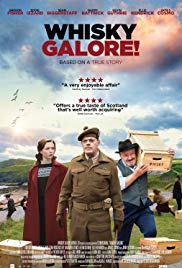 Storyline:
The story of the inhabitants of the isolated Scottish island of Todday, in the Outer Hebrides, where gloom sets in as their wartime rationing of whisky runs out. When cargo ship the SS Cabinet Minister runs aground the shrewd islanders run rings around the buffoonish English Home Guard commander Captain Waggett and conspire to hide away cases of the precious amber nectar.
Written by
AnonymousB
User Reviews: In the midst of World War 2 Scottish spirits (no pun intended) are at an all-time low when a local publican announces that their supply of whisky has run dry. This leads to the local community becoming even more depressed making a troublesome time even more arduous. However, their luck changes when a cargo ship transporting whisky to New York runs a ground and the locals seize their opportunity to steal the whisky despite interference from Home Guard Captain Waggett (Eddie Izzard) and Customs and Excise trying to thwart their chances…

Although I was aware that this film was a remake I hadn’t seen the original so I went in with the benefit of watching this film with a fresh pair of eyes. I have no idea what the original film was like, but the remake was something of a middling effort as far as I was concerned…

Although the actual meat of the film (involving stealing the whisky) was quite fun the actual build up to this event was a little tedious and provided very few laughs. It is only really when Eddie Izzard shows up that the film actually starts to become entertaining – his incompetence is often amusing and the pompous nature of his character makes him fun to watch, but with his character I did feel as though I was merely watching a slight reworking of Captain Mainwaring from Dad’s Army – like I say this works and serves the film well, but if you draw comparisons in this manner then perhaps it will do more harm than good to the film.

I think what really lets the film down is in its messy and rather unfocused plotting; the stealing of the whisky is what I came for, but the film seems to put more focus on rather dull sub-plots (a sargeant’s blossoming romance and a tweed salesman who seems to drift in and out of the story). I found that these aspects of the story dragged the film down slightly and took away a lot of the fun.

To be fair though it isn’t all bad though; Izzard gives a committed and amusing turn as the incompetent Captain and is funny in nearly every scene that he is involved in. Special mention should also go to Annie Louise Ross whose turn as the battleaxe Mrs Campbell was pretty memorable and was one of the highlights of the film.

Director Gillies MacKinnon is the real weak link here whose directing is perhaps some of the flattest that I’ve ever seen; it has no life to it and the whole film is a little twee and cutesy and I felt that he could have done a lot more with the concept.

Yes Whisky Galore has its moments, but when these funny moments only come from 2 cast members then you’ve got yourself a real problem. It’s inoffensive enough to make it watchable, but not nearly funny enough to make it memorable.

Storyline:10 years has passed since the confrontation between Kira and L. Again, Shinigami sends death notes to the ground and due to this, the world soon falls into chaos. Tsukuru (Masahiro Higashide) is a member of ...

Storyline:The DigiDestined inaugurate their newest members, Meiko Mochizuki and Meicoomon, with a trip to a nearby hot spring. Meanwhile, Joe is becoming more distant, struggling to balance his duty as a DigiDestined ...

Storyline:When Kevin is witness to the holiday heartbreak of his life, Brad and friends come to the rescue with a disastrous guys night out.User Reviews:

Storyline:Tyler is a young man who is desperately seeking direction from a world that seems to have abandoned him. Searching for answers he looks to his new friend Indrid who appears to have it all figured out.User Re...

Storyline:A contract killer takes vengeance against a ruthless drug cartel, resulting in a mysterious puzzle that a small town sheriff must solve in order to stop untold horrors.User Reviews:

Storyline:Two lovers are forced to split up after they scam the wrong people.User Reviews: