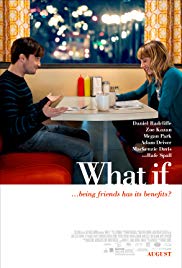 Storyline:
WHAT IF is the story of medical school dropout Wallace, who’s been repeatedly burned by bad relationships. So while everyone around him, including his roommate Allan seems to be finding the perfect partner, Wallace decides to put his love life on hold. It is then that he meets Chantry an animator who lives with her longtime boyfriend Ben. Wallace and Chantry form an instant connection, striking up a close friendship. Still, there is no denying the chemistry between them, leading the pair to wonder, what if the love of your life is actually your best friend?
Written by
CBS Films
User Reviews: What a great movie to see as an escape from the mindless explosions in so many "Hollywood" movies. The characters were great. It was very funny! And it was touching. It would probably be in the "chick flick" category, but that’s an unfortunate way to pigeonhole this movie. Spoiler alert!!! (I just want to be on the safe side.) I would classify this movie as an updated version of When Harry Met Sally. Daniel Radcliffe is excellent, as is the rest of the cast. We went to a sneak preview a few days ago and I was kind of shocked to read that it was made last year(2013) and "might have a Valentine 2014 release". What the heck happened? I am glad it has a release date for next month(8-2014) I am going to spread the word via Facebook and texts. Great movie.

Storyline:John and Carl have a small publishing company. One day John meets the poet Clara who recently made her debut, and Clara's fiancé Stig. John and Clara fall in love with each other, and she moves into an apart...

Storyline:Brilliant Cancer specialist Dr. Michael Durant is emotionally troubled, wrestling with the traumatic loss of his 10 year old daughter from Cancer. Immersing himself in his work in the hospital, away from his...

Storyline:Still reeling from a rocky divorce and the recent death of her father, Clair Defina, a 33 year-old New York writer, needs a change. Her best friend, Isolda, suggests they drive up the coast of Maine to the r...

Storyline:This musical is based on four short stories by Damon Runyon. In one tale, gambler Feet Samuels (Randy Quaid) sells his body to science just as he realizes that Hortense Hathaway (Madonna) loves him and that ...

Storyline:Tom Sheridan has risen through the London underworld and now owns a thriving nightclub. When Ian, an old friend and former colleague, asks to use the club for a private party, Tom agrees. But when he finds o...