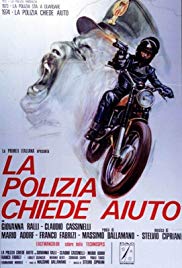 Storyline:
Police investigate apparent suicide of teen girl and uncover details of a teenage prostitution racket. They go on the hunt for a motorcycle riding killer.
User Reviews: A young naked schoolgirl is found hanged in a room locked from the inside, the police suspect suicide, until that is the clues seem to point in the direction of murder. So when the police led by Inspector Silvestri(Claudio Cassinelli) with the assistance of the asst district attorney Vittoria Stori (Giovanna Ralli) realise that they are investigating a teen prostitute ring with some highly influential people involved, they know they are going to have a tough time convicting anyone and sure enough their investigation is dogged with interference and dead ends. Dallamano director of What have they done to Solange? again returns to his schoolgirl in peril themed story and like its predecessor it’s a highly controversial topic that is handled professionally and intelligently. Despite its topic, there’s very little in the way of visual sleaziness here, the offences against the girls are confined to tape recordings the police have and its from these that they build their case. The film is in fact only half Giallo and plays more like a Poliziotteschi (Italian police procedure film), we only get brief glimpses of the leather clad killer as he tries to cover up his identity by killing those who might be able to give him away. Stelvio Cipriani again provides an excellent score, the film looks good visually, no more than you’d expect from a director who used to ply his trade as a cinematographer, there’s also a very memorable chase scene that livens up the film immensely. Claudio Cassinelli and Cortese provide some fine acting in their respective roles, if there is such thing as a high brow Giallo this must surely be it.