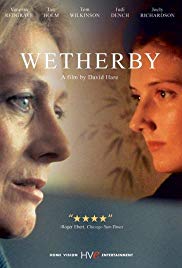 Storyline:
The mysterious death of an enigmatic young man newly arrived in the suburb of Wetherby releases the long-repressed, dark passions of some of its residents.
User Reviews: David Hare’s quiet masterpiece conveys a genuine sense of alienation and dislocation while covering a great deal of social and political ground. It never loses sight of the human story, though; the loneliness of the characters comes through in this startlingly intelligent drama which unfolds slowly, like a flower under time lapse photography. We watch the bloom, flowering and eventual withering of the characters’ bodies and minds over several decades of social discord, emotional disappointments and lost dreams.

It’s stunning how Hare constructs such an involving character study under the framework of a conventional mystery. The inexplicable suicide of a young man draws the viewer in but it’s the characters that involve the viewer in a greater mystery of the heart; how did these people get to this point in their lives and the history of a nation? Hare delicately examines the spiritual decay of late-20th century British society and how it impacts all generations, from the haunted post-war generation to the alienated, disconnected contemporary youth. Ultimately both groups are unable to reach out to each other, trapped in the inescapable malaise which spares no-one.

Vanessa Redgrave carries this film. In her eyes a dazzling spectrum of emotions infuse her scenes with joy, heartbreak, hopelessness, elation, and everything else in between. It’s a brilliantly written film but no words are necessary to understand the despair. It’s all in her eyes.

Storyline:Stig Helmer takes another vacation with his Norwegian friend Ole. This time it's time for a skiing vacation in the Alps. Of course, Stig Helmer has never learned downhill skiing, but he attends a ski school....

Storyline:Based on the NY Times best-selling memoir "Guantánamo Diary" by Mohamedou Ould Slahi, this is the true story of Slahi's fight for freedom after being detained and imprisoned without charge by the U.S. Govern...

Storyline:After her mother's death sixteen-year-old Sophie Jones is trying everything she can to feel something again and make it through high school.User Reviews: There's a lot to admire here. The cast is uniformly e...

Storyline:They sought sanctuary. They found him. 'An ex-serviceman is forced to seek refuge for his team and the family in their charge in rural Scotland, with devastating consequences'User Reviews: