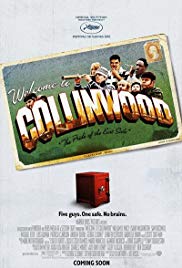 Storyline:
When petty thief Cosimo is given the plan for the perfect heist from a lifer in prison – the kind of job you dream about – he has to get out of jail, fast. But with Cosimo stuck in the joint, it’s up to his girl Rosalind to track down a patsy. But while no one wants to do the time for Cosimo’s crime, everybody seems to know a guy who will – and for a share, they’re willing to track him down. Before long, Rosalind has five guys trailing behind her, looking to get their bungling hands on a piece of the action.
Written by
Anonymous
User Reviews: It takes my breath away to see some of the uptight and/or pretentious "reviews" of this very funny film that are on this site. "No character depth"? "Weak plot"? Is there a class these people take, called "THE POINT, AND HOW TO MISS IT"??? It’s just a well-shot, well-written, well-acted slapstick heist film, for goodness sake – and the characters are SUPPOSED to be shallow idiots! It tells you that on the video cover! Were the characters in "Oh Brother, Where Art Thou?" deeply developed? And was that not a GREAT film, or did I miss something? I strongly suggest that anyone who is simply after a good laugh should watch this film, and that those who seek high art in everything they see should either learn to relax a bit, or spare the rest of us their tedious opinions! Sheesh…