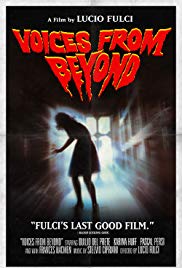 Storyline:
Wealthy businessman Giorgio Mainardi has died of a stomach hemorrhage, but his ghost is not so sure that it was a random misfortune and wants to know the truth. Unfortunately, almost everyone around him is happy to see him gone. Everyone, that is, except for his daughter Rosy, who still feels affection for her father even though they have drifted apart. With her medical student boyfriend, Johnathan, Rosy will try to get to the bottom of her father’s death.
Written by
Jean-Marc Rocher <[email protected]>
User Reviews: Lucio Fulci’s penultimate movie is par for the course for the Italian godfather of gore in that it is a largely incoherent effort, an offbeat horror mystery enlivened by some bloody effects to keep the director’s die-hard fans happy. There are also several surreal dream sequences (including one involving rotting zombies) and a reasonable helping of sweaty nudity for those who prefer their Euro-horror on the sleazy side.

The story starts with a wealthy man, Georgio Mainardi (Duilio Del Prete), dying from sudden internal haemorrhaging. As an autopsy is carried out (in graphic detail, naturally), Georgio’s spirit questions what has happened to him. Determined to find out the truth, he contacts his daughter Rosy (Karina Huff) from beyond the grave; however, with the majority of Georgio’s family and acquaintances having good reason to want the man dead, and with the guilty party covering their tracks, Rosy won’t find it easy to solve the mystery.

While a long way from the director’s best work, there are still a few scenes that make this one watchable: the aforementioned autopsy will appeal to gorehounds (also worth a mention are the frequent cuts to Georgio’s interred body, each time the corpse a little more decomposed); those who enjoy the bizarre will love the freaky dream sequence set in a restaurant patronised by weird creatures with tentacles, where a serving of fried eggs turns into a plate of eyeballs; and those who like naked ladies will appreciate the T&A from pretty blonde Huff and brunette Bettina Giovannini as Georgio’s wife Lucia.

Storyline:Daniel is a writer, who arrives to an secluded inn in the countryside near a lake, in there, he meets the owner Veronica, a beautiful but perturbed woman who is married to an invalid. Suddenly, one by one ot...

Storyline:"Red Lips" are two female detectives trying to find missing models and dancers. A pop artist called Klaus Thriller and his werewolf-like assistant, Morpho, are the main suspects for the murderers. ...

Storyline:Rick Todd and Eugene Fullstack share an apartment and have dreams for the future. Rick is an aspiring artist looking for a break. Eugene loves comic books, especially The Bat Lady series. He is so engrossed ...

Storyline:A fictionalized account of what may have happened when John Lennon and Brian Epstein went on holiday together to Spain in 1963.User Reviews: A very low-budget indie film - and, boy, does it show! - that is b...

Storyline:We see people in a shopping mall; one man deliberately leaves a backpack behind in the crowd, which, in these nervous times, is decidedly unsettling. Seven vignettes involving the people we've seen are told....