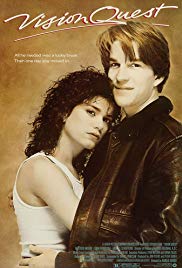 Storyline:
Vision Quest is a coming of age movie in which high school wrestler Louden Swain decides he wants to be something more than an average high school athlete and sets his sights on a prize that many don’t think he can win – he then sets out to reach his goal alone, without much support from his father or coach. His father rents a room to a young drifter, Carla. Swain falls in love with her and she helps him stay focused and prevents him from losing sight of his goals.
Written by
Lynanne Fowle <[email protected]>
User Reviews: Modine is a high school wrestler who’s just turned 18 and is in so much of a hurry to grow up. In the first 45 minutes of the movie, he’s chosen 3 or 4 different careers. (Ah! To be young, again!) The movie follows all the basic plot lines concerning coming of age that does stand the test of time, because, even though this movie is almost 20 years old, a lot of the kids today can relate to it.

Along the way, Modine’s father (Cox) has lost his job, Modine decides to move down, not just one, but two, weight classes to take on the best wrestler in the state, and a very pretty Jersey girl (Fiorentino) shows up on his doorstep to take up all his spare "thinking" time.

This is really not a bad movie. It examines some of what goes on in someone’s head when they get in the frame of mind that they want something that just about everyone else feels is unattainable for them. Modine does a very good job in bringing the character of Louden to believability, and the surrounding cast puts in a good effort as well. It is a better-than-average teen flick movie, but not much (but I think it’s only because I haven’t been a teen ager in so long, myself).

Storyline:With varying degrees of success, recently divorced friends Dave, Vic and Donny are trying to move on with their lives. Vic feels vilified by his ex-wife's parents, while Donny has a shaky bond with his teen ...

Storyline:As the heir and current marketing director for one of the nation's biggest gun manufacturers, Liberty Wallace is indifferent to the atrocities made possible through her business and her CEO husband, Victor. ...

Storyline:10 years before the debut of the Ultimate Fighting Championship. In 1979, Bill Viola and Frank Caliguri dreamed up a contest pitting barroom bigmouths against wrestlers, martial artists, boxers, bouncers an...

Storyline:Blast off to adventure in this animated feature where our favorite space-age family, The Jetsons, meet the superstars of WWE! When George unearths WWE’s Big Show, who has been frozen for 100 years, the futur...

Storyline:Star-studded thriller about the sordid murder of reckless Las Vegas casino mogul Ted Binion. This gritty film delves into the twisted world of Binion's beauty-queen-turned-stripper girlfriend, Sandy, and her...