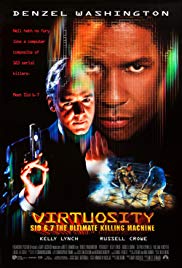 Storyline:
The Law Enforcement Technology Advancement Centre (LETAC) has developed SID version 6.7: a Sadistic, Intelligent, and Dangerous virtual reality entity which is synthesized from the personalities of more than 150 serial killers. LETAC would like to train police officers by putting them in VR with SID, but they must prove the concept by using prisoners as test subjects. One such prisoner is ex-cop Parker Barnes. When SID manages to inject his personality into a nano-machine android, it appears that Barnes might be the only one who can stop him.
Written by
Murray Chapman <[email protected]>
User Reviews: Virtual Reality gets a look, following in the footsteps of "The Lawnmower Man." If you saw "The Matrix"(99) and were wondering where you glimpsed the VR scenery years earlier, it may have been in this pic. Here, Denzel gets to briefly run around inside a VR world, chasing after virtual killer Russell Crowe, known as Sid 6.7 (very close to 6.66, isn’t it?). Sid 6.7 is the latest computer program, a conglomeration of about 200 serial killers & mass murderers, and so advanced it’s virtually self-aware. The bulk of the picture takes place in the real world, to which Sid 6.7 manages to escape to with the help of very advanced nanotechnology. I believe this was supposed to take place slightly in the future (1999), but from our perspective, it’s old hat and square. Everything looks outmoded and just old, except the strangely hi-tech VR and nanites.

It’s also interesting, from the modern perspective, to view an early role of Crowe’s, before he hit the A-List. He doesn’t have much to play with here. His character doesn’t have the luxury of falling back on deep psychological reasons for his murderous ways, because he’s inhuman. He’s simply the latest software given locomotion in the semblance of a human body. He’s programmed to be the way he is – there’s no choice involved on his part. There’s a brief mention of his program evolving once in the real world, but there’s no actual evidence of that. Once in the real world, it’s a simplistic chase & destroy mission, with Denzel the only one in the city trained to stop him. Denzel, just getting on the A-List a couple of years earlier, is standard action hero here, driven by a brutal tragedy from before the film begins. The motivations for a couple of key supporting characters are suspect; the designer of Sid 6.7, for example, turns out to be almost as psychotic, but it’s hard to believe no one noticed this before (was he influenced by the software?). Fichtner, as a government aide, has the most thankless role, as an idiotic bureaucrat. The child actress playing the daughter of Lynch’s character went on to teenage bombshell roles in TV series, the latest being "Charmed."