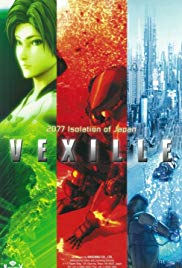 Storyline:
Japan, 2077: A female agent named Vexille is dispatched to Tokyo to investigate whether Japanese are developing robotic technology, which has been banned by the U.N. due to its potential threat to humankind.
User Reviews: This is so far the biggest problem with Japanese animé: weak character development, mediocre and plain dialog that seems to be aimed towards children under 10 years of age, redundant stories, characters that look too much alike – we get it that it’s a style, but some of the character look like cheap duplicates of one another like Maria & Vexille.

The animation itself wasn’t that bad, although it seems like there hasn’t been much improvement for the past 7 years… the people are still stiff and have a dead look from time to time, the kissing scene between two main characters was very stiff and unnatural like two dolls kissing.

The effects were nice and definitely passable, but the weak plot of the movie is tiring.

now last, but not least, is the music… it didn’t fit with the scenes, totally random and seemed to be there just because someone liked the sound and not how it fit with the story…

Storyline:The story follows a trio of Japanese youths of Chinese descent who escape their semi-rural upbringing and relocate to Shinjuku, Tokyo, where they befriend a troubled Shanghai prostitute and fall foul of a lo...

Storyline:Seibei Iguchi leads a difficult life as a low ranking samurai at the turn of the nineteenth century. A widower with a meager income, Seibei struggles to take care of his two daughters and senile mother. New ...

Storyline:The story recounts the early life of Genghis Khan, a slave who went on to conquer half the world in the 11th century.User Reviews:

Storyline:The Valley of Light is a beautifully-filmed, sentimental movie of a young man's quest to make sense of his experiences and find new meaning in life. While this film deals with weighty material such as the su...

Storyline:Van Damme plays a dirty cop who is hooked on heroin, and everyone dislikes him. Because of an accident he is put into a coma, and comes out of it a better person. He wakes up wanting to put things right.User...