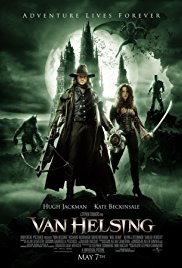 Storyline:
Van Helsing is in the world to rid all evil, even if not everyone agrees with him. The Vatican sends the monster hunter and his ally, Carl, to Transylvania. They have been sent to this land to stop the powerful Count Dracula. Whilst there they join forces with a Gypsy Princess called Anna Valerious, who is determined to end an ancient curse on her family by destroying the vampire. They just don’t know how!
Written by
Film_Fan
User Reviews: Hugh Jackman and Kate Beckinsale. Were it not for these two gifted performers, this movie would be beyond silly. As it is, the plot is almost pretextual for the special effects.

The Eye Candy factor is high, though. Hugh Jackman as the tortured hero, filmed in the dark all of the time, makes us weak in the knees. Kate Beckinsale does magnificent physical feats while squeezed into a corset.

The story: Van Helsing (Jackman) is essentially a bounty hunter of supernatural monsters, a job he took on at the request of the church as apparent penitence for sins he cannot even remember. As a reward for his centuries of service, he hopes to make his way to Heaven instead of Hell.

Anna (Kate Beckinsale) is the last survivor of a family of Transylvanian vampire hunters. Her brother has become a werewolf and she is conflicted about whether he should live or die.

Naturally Anna and Van Helsing team up to rid Transylvania of the evil vampire overlord. Van Helsing has a tool kit Batman would envy, and Anna maintains an arsenal of monster-killing weapons that would make a survivalist proud. Between the two of them, the monsters don’t stand a chance.

Put your mind on hold, suspend disbelief and intolerance for the occasional leap of reason, enjoy a slightly randy friar (Van Helsing’s sidekick), and go along for the ride. Van Helsing is a great Sunday afternoon video.