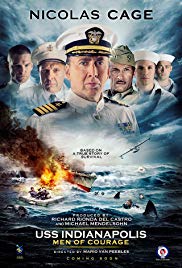 Storyline:
The harrowing true story of the crew of the USS Indianapolis, who were stranded in the Philippine Sea for five days after delivering the atomic weapons that would eventually end WWII. As they awaited rescue, they endured extreme thirst, hunger, and relentless shark attacks.
Written by
Anonymous
User Reviews: This movie has some things to offer, mainly the true story of the worst naval disaster during World War 2. But it starts out with video game style computer graphics that are way too obvious. I immediately thought "low budget" and I was only 5 minutes into the movie. The movie does tell the story, but it meanders through the lives of the men and seems to focus on conflict rather than camaraderie. I’m not sure how to best depict the horror of 3+ days in shark infested waters. The producers did a decent job at it and had some good shots of sharks with the men in the water which was by far, by far, the best computer use in the movie. It’s a miracle that 300 survived. Not as horrible a movie as some of the reviews, but I wouldn’t recommend this if it hadn’t actually happened. It’s hard to believe otherwise.