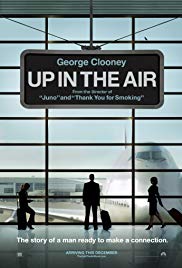 Storyline:
Ryan Bingham is a corporate downsizing expert whose cherished life on the road is threatened just as he is on the cusp of reaching ten million frequent flyer miles, and just after he’s met the frequent-traveller woman of his dreams.
User Reviews: Halfway through this movie I considered it an 8 out of 10 and decently spent money. The second half came as a big surprise. George Clooney let go of all his suave and let his eyes show fear and isolation that real people feel.

There were two things going on in this movie. On one end, we were looking at the people getting fired. On the other end, we were seeing the problems with Ryan’s way of life. The interviews at the end with the people who lost their jobs explaining that it was family and support that brought them through bad times hit a perfect note for bringing both parts of the story together.

The title of this film literally explains what it is like to not know what aspects of your life are solid, such as a home or a significant other. Everything going on is simply up in the air. One day, what you thought was one way will turn out to be something else entirely.

Best of Reitman’s three. Very much recommend it.