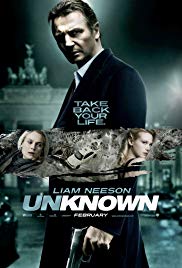 Storyline:
A biochemist and his dishy wife arrive in Berlin for a conference at which a scientist and his controversial Arab funder will announce breakthrough research. While his wife checks into the hotel, he grabs a cab to return to the airport for his briefcase, left at the curb. En route, an auto accident puts him in a coma, from which he awakes four days later without identification and with gaps in his memory. He goes to the hotel: his wife refuses to recognize him and another man has claimed his identity. With help from a nurse, the cab driver, a retired Stasi agent, and an academic friend, he tries to unravel what’s going on. Is the answer in the briefcase?
Written by
<[email protected]>
User Reviews: The researcher Dr. Martin Harris (Liam Neeson) and his wife Elizabeth Harris (January Jones) arrive in the airport of Berlin to participate in the Biotechnology Global Summit. When they take a cab to the Hotel Adlen in the Central Berlin, the taxi driver forgets his briefcase in the kart. While Liz is in the check-in, Martin discovers that his briefcase is missing and he immediately takes a cab back to the airport. During the route, there is an accident and the taxi fall off the bridge into the river, but the driver Gina (Diane Kruger) rescues Martin and saves him.

Martin awakes in the hospital after four days in coma and his Dr. Farge (Karl Markovics) advises him to stay in the hospital since he could be deluded due to his trauma on the head. However, Martin forces the doctor to discharge him and he goes to the hotel. Without any document, Martin is hold by the security of the hotel; but he sees Liz in the hall and the chief of security agrees to go with him to meet his wife. However, she tells that she does not know him; further, she presents her husband, Dr. Martin Harris, to them. Martin goes to the police and tells that the other man is an impersonator. But Martin can not prove who he is since he has no documents and it is Thanksgiving in North America and he can not locate his old friend Dr. Rodney Cole (Frank Langella). Without any credibility, Martin is forced to return to the hospital; but when he is attacked by a stranger the kills his Nurse Gretchen Erfurt (Eva Löbau), Martin realizes that he is involved in a huge conspiracy and nobody believes on him.

"Unknown" is another great thriller with Liam Neeson with a surprising plot point. The intriguing story seems to have flaws, but when the mystery is solved, everything has an explanation. Everything works in the thriller: performances, cinematography, music score and specially the twist.

The fifty-nine year-old Liam Neeson is impressively youthful and fits perfectly to the role of a man that loses part of his recollections, and the gorgeous Diane Kruger is excellent as usual. Despite their difference of ages, they are are convincing as a couple. My vote is eight.

Storyline:Stories of his youth told to Ole Bramserud as they attempt to track down his first love. Showing the origins of his obsessive interest in trains, his Romeo and Juliet love-story as well as the days being bul...

Storyline:11-year-old Wang lives with his family in a remote village in China. Life is tough, but they make the most of what little they have. When Wang is selected to lead his school's daily gymnastics, his teacher r...