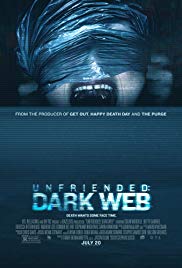 Storyline:
Tells the story about a teen who comes into possession of a new laptop and finds that it may have been stolen. He discovers the previous owner may be watching every move he makes and will do anything to get it back.
User Reviews: Considering that the original movie was a huge commercial success and made back 65 times it’s budget I wasn’t shocked to hear a sequel was being made, I didn’t expect it to be so much better though.

Don’t get me wrong I think the first film had some great ideas and I like the cpu screen method of filming but it was lacking in a lot of areas and my final score for it was a very disappointing 4/10.

This sequel goes in a new direction altogether. It maintains the same appearance but the supernatural element is out the window for a more modern stylish smart approach and it works wonders.

Yet another group of 20 somethings are sat in front of their cpu’s skyping away not realising their night is about to take a very dark turn.

A sleek clever little film I walked away from this considerably happier than I expected to. It’s unpredictible, looks great and the cast do a solid job at stressing just how much the situation is spiralling out of their control.

Absolutely well worth a watch even if you didn’t like the first movie, this is a very different creature and makes me now want this franchise to really blossom.

All the video and audio distortions get annoying

I think it could have used a bit of additional time