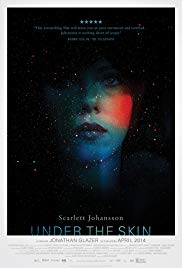 Storyline:
An alien entity inhabits the earthly form of a young woman who combs the roads and streets of Scotland in search of the human prey she came to plunder. She seduces her isolated and forsaken male victims into an otherworldly dimension where they are stripped and consumed. However, existence in all its complexity begin to change the alien visitor. She begins to discover herself as human with tragic and terrifying consequences.
Written by
Claudio Carvalho, Rio de Janeiro, Brazil
User Reviews: The problem with movies like this is that you have the people who hate slow, mysterious movies and it’s automatically 1 star because there were no car chases or dubstep, and the people that feel they have to defend anything quiet and ambiguous like this and give 9 or 10 stars. "So boring" vs "You just don’t get it, man". These types of films always only get 1 or 10 ratings. Really, it’s not possible to make a so-so version?

Sometimes people try to make moody, interesting, thought provoking, different kinds of movies and just don’t do a great job. This film was right up my alley in every way, but in the end I just said "meh". It wasn’t awful, but it did feel a little dull and needlessly drawn out, seemingly because there just wasn’t enough to say to fill the time. There also wasn’t much to get, really people, it’s not that deep or obtuse.

If there had been more eye candy (besides the obvious) I could have dealt with the other weaknesses easier. But I didn’t think the visuals were all that interesting as a lot of people seem to. The whole thing was very film school and didn’t totally feel like the work of a mature director, but if you told me it was a student film or something a first timer made on credit cards I would have believed you and said "hey nice effort, keep at it".

I would like to give it more than a 4 just because it’s totally my kind of film, but it really didn’t deserve it, and as I said, that’s the problem with these kinds of movies, people voting for what kind of film they like instead of how good this particular one was.