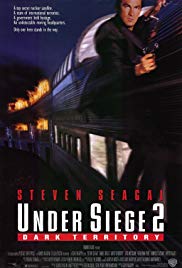 Storyline:
Seal Team Commander Casey Ryback has retired from the Navy since the conclusion of the events in the first movie, and is now a chef at the Mile High Cafe in Denver, Colorado. Ryback is taking his niece Sarah Ryback on vacation, to reconnect and commiserate with her after the death of her parents. They board a train traveling westbound through the Rocky Mountains from Denver to LA. With the help of gun-for-hire Marcus Penn a couple dozen of his mercenaries, ex-CIA brain (and mentally unstable) Travis Dane commandeers the train, takes the passengers and crew hostage, and sets up a mobile control center. He hacks into the CIA database and gains control of a Top-Secret defence satellite he designed during his Agency days that has just been deployed. Funded by various foreign interests, he stands to make 1 billion dollars for using the space weapon to blow up the Eastern seaboard by targeting a nuclear reactor housed beneath the Pentagon. Dane taunts the Joint Chiefs in the Pentagon …
Written by
Angus Brewer
User Reviews: Taking a train journey with his estranged niece during his vacation, imagine Casey Ryback’s surprise when he finds that his train has been seized by terrorists and his niece is among the hostages  he is annoyed to say the least. The terrorists are mercenaries working with the slightly loopy Travis Dane  a former employer of the government who has developed a satellite weapon of immense power. A few keystrokes later and Dane has control of the satellite and starts a bidding war of rogue nations. With Washington the ultimate target, the military response is hamstrung and ineffective leaving Ryback the only hope (again).

Although it is now a fairly derivative genre now, I must admit that, thanks to an early love affair with Die Hard I’ll always give this type of "one man versus terrorist in a etc" situation a try; be it office block, airport, plane, ship, mountain whatever  I’ll have a go. Therefore I’m normally easily pleased as long as the film is at least OK. So I enjoyed Under Siege and decided to rewatch the sequel as it had been many, many years. Needless to say the plot is the usual stuff but with the detail and location changed, and those seeking a strong, engaging narrative will likely be a bit let down as the film regularly has big holes of logic or just common sense. However this is nick-picking and really you should know what you’re getting with this sort of thing by now  no, what is important is the action, the violent noisy action.

On this front the film doesn’t excel itself but it does enough to be worth a brainless watch if you’re in the mood. The limited budget reveals itself in regards the average special effects at times but mainly the action takes the form of scuffles, dummies falling from trains and things going bang. All this is delivered with enough pace to be enjoyable  fans of Seagal will look back at this with a certain fondness because he actually convinces as a martial artist as opposed to the lardy lump he is becoming of late. Those that require more than the basics will not get into it so easily but it is a noisy affair with enough laughs (intentional and unintentional) and action to go well with a beer. Although Seagal moves well, this is yet another film that shows his very limited range. I can forgive his calm appearance during fights (he’s trained to be like that right?) but other than this he can only really smirk or look slightly annoyed  even when the train explodes around him he looks like a man out for a stroll who has suddenly been caught in the rain. Some might not mind this but it tends to take away from the "realism" (if I can apply the word to such a film) and not grip as much as it should. Bogosian has clearly been watching the first film and learnt that he needs to play crazy to get attention  thus he is loopy and OTT and quite fun even if it isn’t that original. McGill is a tough baddie for Seagal to fight and he plays that well. Chestnut is average comic relief at best but does OK but Heigl is a female non-entity and is upstaged by the gorgeous Alaouie, despite the latter having one or two lines and very little screen time.

Overall this is a basic film that plays by the genre rules without any real effort or imagination, but if you know that already then you’ll enjoy it. As silly as it is fun, I enjoyed in equal amounts getting into the action while also laughing at Seagal’s flat performance. Basic but fun.