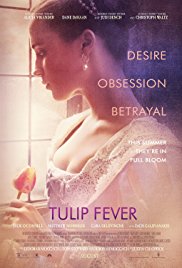 Storyline:
In 17th Century Amsterdam, an orphaned girl Sophia (Alicia Vikander) is forcibly married to a rich and powerful merchant Cornelis Sandvoort (Christoph Waltz) – an unhappy “arrangement” that saves her from poverty. After her husband commissions a portrait, she begins a passionate affair with the painter Jan Van Loos (Dane DeHaan), a struggling young artist. Seeking to escape the merchant’s ever-reaching grasp, the lovers risk everything and enter the frenzied tulip bulb market, with the hope that the right bulb will make a fortune and buy their freedom.
Written by
lament
User Reviews: "Tulip Fever" (2017 release from the UK; 107 min.) brings the story of a young Dutch woman’s love tribulations. AS the movie opens, we get a quick (animated) introduction how tulips entered into the Low Lands. We then get to know Sophia, an orphan living at the St. Ursula convent in Amsterdam. She is married out to an old guy. We then are informed that it is "Three years later, Amsterdam 1634", and Sophia has not yet been able to provide an heir to her husband Cornelis. At some point Cornelis commissions a portrait from a young up-and-coming painter Jan Van Loos. At this point we’re less than 15 min. into the movie, but to tell you more would spoil your viewing experience, you’ll just have to see for yourself how it all plays out.

Couple of comments: this is the latest movie from British director Justin Chadwick, who previously gave us the Mandela bio-pick "Long Walk to Freedom". Here he brings the best-selling novel of Deborah Moggach to the big screen, and certainly it’s not the talent that is lacking: Alicia Vikander! (as Sophia); Christoph Waltz! (as her husband); Judi Dench! (as the abbess of St. Ursula); Dane DeHaan! (as the painter). Alas, the script is nothing short of horrible. The "love tribulations" left me completely unmoved. The way the "tulip fever" (which actually did happen in real life) is worked into the plot makes no sense at all. Worst of all, the way the scenes plays out, one has the impression that Amsterdam was the most people-congested place on earth, and literally in a party mode all the time. Bottom line: this film was shot in 2014 and a teaser was shown at the 2015 Cannes film festival. Since then, 2 1/2 years ago, the film has been gathering dust on a shelf while the movie makers desperately tried to salvage it by recutting it. They should’ve simply let this one die on the vine, as it easily is one of the worst movies I have seen this year (and I see a lot of movies).

"Tulip Fever" finally was recently released, and I happen to catch it during a recent family visit to Belgium. The Saturday early evening screening where I saw this at in Antwerp was attended poorly (6 people, including myself). Given the dismal reception this movie has gotten, I cannot see this playing long in the theater. If you wish to watch this movie (say, because Alicia Vikander is in it–reason I wanted to see it). do so at your own peril, and don’t say afterwards that I didn’t warn you! I cannot recommend this film in good conscience to anyone, sorry.