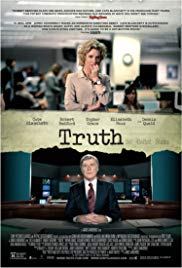 Storyline:
The story of The Killian Documents controversy (a.k.a. “Rathergate”) in the days leading up to the 2004 presidential election. When veteran newscaster Dan Rather and CBS News head Mary Mapes choose to air a segment on 60 Minutes exposing how President Bush avoided being drafted to Vietnam through his father’s political advantages, the resulting fallout ultimately costs them their jobs and reputations.
Written by
Connor Smith
User Reviews: "Absolute truth is a very rare and dangerous commodity in the context of professional journalism." Hunter S. Thompson

Every journalism student should see Truth, a true version of a true event that included liberal CBS; liberal anchor, Dan Rather (Robert Redford); and liberal producer for 60 minutes, Mary Mapes (Cate Blanchett). The latter two sacrificed their jobs possibly for the ideal of bringing down George W. Bush in his campaign to become president for the second time.

The journalists thought they had a story about Bush slacking in his National Guard tour, but what they had was forged documents that eventually cost them their jobs and credibility. Mapes was the prime agent of the fiasco, pushing to get a story on 60 Minutes when it was too close to deadline and more substantiation was needed for the source and his documents.

First-time director and seasoned-writer James Vanderbilt takes an almost cool approach, not quite as weighty as All the President’s Men or as frenetic; the journalists young and old struggle with the profession’s verity: Vet your stories and your sources until they bleed truth. Mapes and her vigilantes are up against a deadline, so more verifying of documents and sources is not possible. Thus, they should not have run with the story, but they did. Dan Rather, for all his experience as CBS news anchor, should not have trusted in Mapes’ research, but he did.

Most of all they should not have trusted Lt. Colonel Bill Burkett (Stacy Keach), who provided the documents purporting to show Bush’s slacking. Because Burkett was a known liar and fervent Kerry supporter, no one should have trusted him before corroborating his information. Journalism students, beware of cutting corners on the road to truth. The film is an excellent primer on best practices.

Truth is a classy, almost unbiased rendition of a true story, an entertaining thriller filled with first-rate actors. If there is one flaw, I submit for your consideration that the film is too reverent of Mapes and Rather, who made a blunder unworthy of their status and experience. They are more heroic than they deserve. As cautionary players on the big media stage, they are the finest examples of flawed human beings.

"I think journalism gets measured by the quality of information it presents, not the drama or the pyrotechnics associated with us." Bob Woodward

Storyline:Anna, mother of three, has lived for forty years in her corner of hell. She was an impertinent and unfortunate girl, but by now she has become a generous woman, perhaps far too tolerant. She is a prisoner of...

Storyline:In the First World War, alongside the men fought an army of animals. Mules, oxen, dogs, horses, pigs, pigeons were used for moving units and materials, communications, and for the support of the troops. The ...