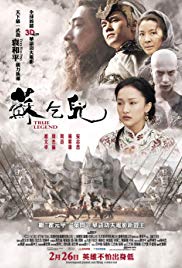 Storyline:
Su Qi-Er retired from his life as a renowned Qing dynasty general in order to pursue his dream of a family and his own martial arts school. However, Su’s peaceful life is shattered when his vengeful adopted brother, Yuan Lie, kidnaps his son and leaves Su for dead. Saved from his demise by his wife Ying and the reclusive doctor Yu, Su resolves to perfect his technique so that he may defeat Yuan Lie and reunite his family. Suffering from visions that he aided in his training by two of the “Eight Immortals” in the form of the mystical “God of Wushu” and the eccentric “Old Sage” master of Drunken Boxing. He embarks on the path that would eventually give rise to the legend of the “King of Beggars.”
Written by
Sam Sung-Sang
User Reviews: Tagline: Yuen Woo Ping tries hard and manages to entertain in an uneven manner…

It’s been too long since The Blade’s Vincent Zhao last cinematic venture. The lad for all his worth was groomed to be Jet Li’s successor. For whatever reason, he disappeared off the radar and wandered into the wilderness of mainland television. Zhao lacks the on-screen charisma or likable good looks of Jet Li, but there is no doubting of his martial arts ability and his physical presence is comparable to Donnie Yen. Many would probably have forgotten that Zhao’s career got off to a storming start by simply existing under the shadows of Jet Li in roles like Wong Fei Hung and the villain in Fong Sai Yuk, before embarking on the cult classic lead role in The Blade. Impressive resume one might assume. So instead of rambling on about past laurels, Zhao makes a stunning return and one might just assume, his career is on the rebound.

The movie goes like this: Beggar So (Vincent Zhao) is army general, but gives up the position for family life. Beggar So gives all his status to his adopted brother (Andy On) and lived a life of an ordinary person. Until one day, Andy On returns home and killed Zhao’s father (Leung Ka-Yan) in avenging On’s own nemesis. The result is Beggar So escaping alive with his wife waiting for an opportunity to strike back.

Director Yuen Woo Ping is obviously in top form and there are a number of action sequences that are original enough for a mention. The fight in the snake well between On and Zhao is both innovative and fun. Hong Kong no longer has a huge luxury of upcoming kung fu star. While Vincent Zhao isn’t exactly in his twenties, but he is still young enough to relaunch a career and with a bit of luck, he may even be able to match the reinvention successes of a similar counterpart in Donnie Yen. Sure, Zhao can’t act and when he tries, more than often he is overacting in the famous Yen’s style. It remains to be seen if Zhao is given a better material, he will be able to embrace it as his own.

As usual, Zhou Xun is a wonderful actress of both quality and presence. While not exactly a conventional beaut, Xun is one heck of an actress that makes the unnatural natural. She have been constantly stealing the show in numerous epics starring as side characters, but in all honestly her acting ability is second to none in the current HK cinema. In fact, when considered on a whole, Xun is given a paper thin role with nothing to work with, yet somehow she manages to impress, engage and express.

Moving on to Andy On, he is certainly a case of missing in action. For the past decade, since his terrible debut in Black Mask 2, Andy On has showed himself to be a decent supporting actor. In fact, he was the best thing in 2003’s Star Runner, decent showdown against Jackie Chan in New Police Story. However since then, he has been almost unnoticeable in all circumstances. Perhaps, True Legend is what you call, a re-launch of young Andy’s career. While he does have some screen presence to a certain degree, his acting is too one dimensional and his villainous turn is neither memorable nor effective. The kid got martial arts potential; let’s just hope he is not suitability wasted away.

All in all, True Legend is a welcome additional to modern day HK martial arts cinema. While the 3rd act may seem like a remake of Fearless and the film suffers from some obvious coherence and uneven issues. Namely the frequently fast forward style of editing, making days goes by as fast as years. Director Yuen Woo Ping does compensate this by some blood crunching action display and even if it is a carbon copy of Fearless in the third act, there is no doubt that Yuen is simply taking a leaf out of his previous efforts. One may wonder if the film simply ended in the 2nd act, it may well be more coherent, but for me, it would have left me half-baked. So honestly, True Legend really isn’t that bad and in fact, it is quite a decent film with some good parts in between. A welcome return for Shaw Brothers and to a larger extent Mr. Vincent Zhao…(Neo 2010)

Storyline:User Reviews: Reasonably entertaining Chinese "rom com" with a delectably pretty actress or two - depending on your taste. This movie doesn't aspire to much apart from light hearted entertainment a...

Storyline:Yukio is living a charmed life: he is a respected young doctor with a successful practice and a beautiful wife. His only problem is that his wife is suffering from amnesia, and her past is unknown. Things be...

Storyline:Troy wants to die. Lorri has an irresistible need to sleep with a dead man. It's a perfect match, until Troy begins to fall in love with Lorri.User Reviews: So , i was expecting much more from this movie .. ...