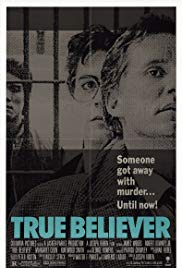 Storyline:
Eddie Dodd is a burnt out former civil rights lawyer who now specializes in defending drug dealers. Roger Baron, newly graduated from law school, has followed Eddie’s great cases and now wants to learn at his feet. With Roger’s idealistic prodding, Eddie reluctantly takes on a case of a young Korean man who, according to his mom, has been in jail for eight years for a murder he did not commit.
Written by
<[email protected]>
User Reviews: Okay. I’m a huge James Woods fan, so I may be a bit biased. But a lot of these reviews on this movie are pretty unfair – *especially* the one where the only comments made about the entire movie was a detailed description of the "nightmare" Woods’ hairpiece inspired for the viewer. C’mon, that has nothing to do with anything. (I, personally, quite liked seeing Woods with long hair for a change – but that’s not the point of this review, so I’m moving on.)

This movie’s plot, about a disillusioned lawyer who has spent the latter half of his career getting drug dealers freed, and suddenly gets a chance at a case where he can really do something _good_ – namely, free an innocent man – is a story that packs a lot of power. And most of that power comes from Woods in his role as Eddie Dodd, the shambled attorney. Man, if Woods would ever find himself without work, he could always go back to school and go into law; raw passion, this guy has it. The court scenes are brilliant. Actually, all of the scenes are brilliant. You can’t watch this movie without being amazed at the depths of emotion that this character is going through, all visible on his face, in his eyes, in his voice. The acting is superb. (A rarity with some more recent movies, in my opinion.) The character is superb. Woods turns him from a character into a real _person_, someone you can relate to, someone you can understand and sympathize with. Which is really what makes a movie great.

The acting is great, the story is gripping – the audience can try to stay one step ahead of the characters, but good luck! Everything unfolds at a good pace, without getting either too slow or too confusing. Robert Downey, Jr., is both amusing and poignant as a green attorney working for Dodds; and Yuji Okumoto, as Shu, has some really in-depth scenes against Dodds. All the characters are great.

It’s got action, it’s got power, it’s got raw emotion, it’s got _feeling_. The ending was poignant enough to make me cry. So, hey, if you like watching a film that will get your attention and maybe even make you re-think a few things about how America is handled, give this movie a try. Because, really, the hairpiece on Woods is actually quite attractive. 😉