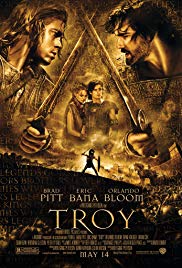 Storyline:
It is the year 1250 B.C. during the late Bronze age. Two emerging nations begin to clash after Paris, the Trojan prince, convinces Helen, Queen of Sparta, to leave her husband, Menelaus, and sail with him back to Troy. After Menelaus finds out that his wife was taken by the Trojans, he asks his brother Agamemnon to help him get her back. Agamemnon sees this as an opportunity for power. So they set off with 1,000 ships holding 50,000 Greeks to Troy. With the help of Achilles, the Greeks are able to fight the never before defeated Trojans. But they come to a stop by Hector, Prince of Troy. The whole movie shows their battle struggles and the foreshadowing of fate in this remake by Wolfgang Petersen of Homer’s “The Iliad.”
Written by
Mensur Gjonbalaj
User Reviews: The primary question about the Trojan War is do you take Homer’s poetry as literal truth? For instance, did a goddess actually save Paris from being killed during his duel with Helen’s husband or is the grain of truth in the episode that Paris somehow survived in a less than noble manner? Similarly, was Achilles’ mother a goddess who dipped her son’s body in the River Styx making him invulnerable in battle or is the grain of truth here – as some historians have suggested – that he had some of the first iron armor which could not be penetrated by the bronze weapons of his opponents.

What Troy accomplishes is a very well done depiction of the human egos, ambitions, flaws, anger, and tragedy that lie beneath Homer’s poetry. The acting is excellent, the costuming beautiful, the special effects are flawless, and the battle sequences are wonderfully choreographed. If you aren’t interested in any of that then you can just relax and enjoy watching Brad Pitt, Orlando Bloom, and the rest of the cast.

Hundreds of years later Troy was still remembered in Homer’s time because it was a clash between two great civilizations which went to war and destroyed themselves.