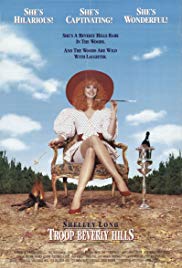 Storyline:
As Phyllis, a Beverly Hills housewife, is in the middle of a divorce, she tries to find focus in her life by taking over her daughter Hannah’s Wilderness Girl troop. Among the girls are Tiffany, (who her father has to bribe to attend meetings, Emily (the daughter of an out of work actor, whose financial difficulties hinders her wanting to participate in certain activities), the neurotic Tessa (whose parents divorce has forced her into therapy twice a week), the hostile Chica (whose parents are too busy with their own lives to even remember her birthday), and Claire (the child star who see the wilderness girls as her chance to lead a “normal” life). Phyllis then begins to take the girls camping at a Beverly Hills hotel and earn patches relating to material things. The district leader, Velda, feels the troop should be disbanded. However, the head of the Wilderness girls organization believes that as long as Phyllis has taken an active interest in the girls, that is the only thing that’s…
Written by
Theresa
User Reviews: Family fare for an entertaining evening at home. The problem of divorce is posed in this film without detracting from the value of marriage. Shelley Long portrays a bored Beverly Hills wife whose husband is leaving her for another woman. Deciding to make something of her life she volunteers to be the leader for her daughter’s "wilderness girls" troop (I guess they couldn’t get the rights to girl scouts). Shelley Long is a hoot as she tries to make it through a camp-out without getting her nails ruined. Both her and her troop of pampered Beverly Hills princesses learn valuable lessons in character, courage, and friendship with a super happy ending (no spoiler). Great mother-daughter movie.

Storyline:Older, wiser but still a wandering loner, the blind, peace-loving masseur Ichi seeks a peaceful life in a rural village. When he's caught in the middle of a power struggle between two rival Yakuza clans, his...