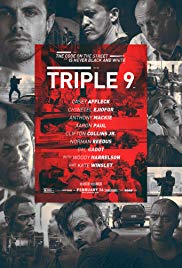 Storyline:
In TRIPLE 9, a crew of dirty cops are blackmailed by the Russian mob to execute a virtually impossible heist. The only way to pull it off is to manufacture a 999, police code for “officer down”. Their plan is turned upside down when the unsuspecting rookie they set up to die foils the attack, triggering a breakneck, action-packed finale filled with double-crosses, greed and revenge.
Written by
Open Road Films
User Reviews: Triple 9, set in the gun-ridden streets of Atlanta, is surprisingly well executed and at times impressive to look at. But it does leave a rather unpleasant after-taste: like last year’s Liam Neeson vehicle "Run All Night", virtually no one in the film has a redeeming feature which makes it difficult to empathise or root for anyone.

The excellent Chiwetel Ejiofor ("Twelve Years a Slave") plays Michael Atwood, the leader of a gang doing a bank job for the Russian mafia led by Irina Vlaslov (Kate WInslet). The gang stay one step ahead of the local cops by plotting patrol car movements on a GIS map: that’s pretty easy for them since they are all crooked cops and ex-military. Atwood’s character is intimately linked to Vlaslov’s, as he has a son with her sister Elena (Gal Gadot). But the mafia is not easy to please and Atwood is strong-armed into doing a second, more challenging job that requires a significant police diversion. This diversion is the root of the "999" of the title: the call sign for "officer down".

Investigating the robbery and the subsequent chain of events is flawed cop Jeffrey Allen (Woody Harrelson), who is also trying to help his nephew Chris (Casey Affleck) aclimitise to the city’s gang culture following a transfer from a much cushier neighbourhood. The strands of the story intertwine to violent and bloody ends as Atwood fights to protect his family and escape the ever-tightening grip of the mafia and the closing net of Harrelson’s dogged detective.

All the performances here a generally excellent. Ejiofor is an actor who perfects the look of being totally hacked off, and here he has plenty of opportunities to exercise that. His closest colleague Belmont (Anthony Mackie, Falcon from the "Avengers" films) is also extremely watchable. Elsewhere, the shapely Miss Gadot is a little too one-dimensionally drawn for my taste, but the other members of the gang and Harrelson and Affleck as the two ‘good guy’ cops are nicely portrayed. The most surprising turn though is that of Winslet who revels in her evil Russian bitch persona, a role diverging from her usual norm and which is great to watch.

The story and screenplay by newcomer Matt Cook is sufficiently dense to require attention in following it it reminded me in places of "LA Confidential" and like that film contains enough twists and turns to keep up the interest. Character development though is limited, so when the twists do happen its an "oh" rather than an "OH!". The screenplay is let down by a bit of a damp squib of an ending and one that doesn’t bear close scrutiny if you’ve seen the film, the hero is SURELY in more imminent peril in the two minutes preceding the denouement?? But the journey to get to the ending is satisfying enough.

Cinematography (Nicolas Karakatsanis, "The Drop") and film editing (Dylan Tichenor, "There Will be Blood") are also worthy of note, particularly with the impressive opening titles which straight away tell you this is not just A.N.other cop ‘B’ movie.The robbery scenes and one involving a police raid on an apartment building are both well edited and exciting.

So, in summary, a good solid job by director John Hillcoat ("The Road") that is worthy of your rental dollar. Just make sure you have some TV/movie ‘sorbet’ to cleanse the palate after watching.

(Please visit bob-the-movie-man.com for the graphical version of this review. Thanks.)