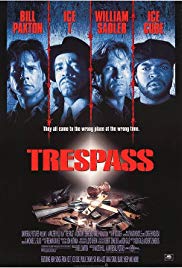 Storyline:
Two Arkansas firemen, Vince and Don, get hold of a map that leads to a cache of stolen gold in an abandoned factory in East St. Louis. What they don’t know is that the factory is in the turf of a local gang, who come by to execute one of their enemies. Vince sees the shooting, the gang spots Vince, and extended mayhem ensues. As Vince and Don try to escape, gang leader King James argues with his subordinate Savon about how to get rid of the trespassers.
Written by
Jesse Garon <[email protected]>
User Reviews: Two firefighters (played by Bill Paxton and William Sadler) find a map that leads to stolen gold. It’s located in a huge abandoned factory. Unfortunately it also happens to be where a band of black drug dealers have their headquarters. Soon it’s blacks vs. whites to the death.

A dynamite thriller on full throttle–full of non-stop swearing, plenty of gun fights and gruesome killings. The plot doesn’t really make a lot of sense but once this movie kicks into gear you won’t care. The action is virtually non-stop and there’s a loud pounding music score that propels the movie along. There’s also some intentionally funny humor in here so it’s always clear that this is not to be taken seriously. The acting is mostly just OK–but who watches this for the acting? Paxton is the only one who gives a really good performance. The only debit here is that the movie constantly keeps switching from color to b&w (the POV of a gang member filming all this). It’s jarring and unnecessary.

This was a bomb at the box office and didn’t hit it big on video either. That’s really too bad because it’s one of director Walter Hills best film. Tough, violent and exciting. An 8 all the way.