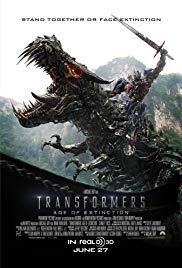 Storyline:
After the battle between the Autobots and Decepticons that leveled Chicago, humanity thinks that all alien robots are a threat. So Harold Attinger, a CIA agent, establishes a unit whose sole purpose is to hunt down all of them. But it turns out that they are aided by another alien robot who is searching for Optimus Prime. Cade Yeager, a “robotics expert”, buys an old truck and upon examining it, he thinks it’s a Transformer. When he powers it up, he discovers it’s Optimus Prime. Later, men from the unit show up looking for Optimus. He helps Yeager and his daughter Tessa escape but are pursued by the hunter. They escape and Yeager learns from technology he took from the men that a technology magnate and defense contractor named Joshua Joyce is part of what’s going on, so they go to find out what’s going on.
Written by
[email protected]
User Reviews: Transformers: Age of Extinction is the fourth film of the Transformers franchise, a franchise that’s known for being explosive and action- packed and kind of dumb. This film is no exception, it follows the other films like in the exact same regard. But I do think this is an improvement from Dark of the Moon and a BIG improvement from the horrid, Revenge of the Fallen. The film takes a bit more serious approach, but don’t get me wrong it still has some stupid humor, just not as much as the previous films, which is pretty refreshing.

The action scenes in here are pretty outstanding and it actually has much more wide shots than the previous movies. You can actually see the large scale of these giant robots in breathtaking detail. The visual- effects are fantastic as they usually are with these films, it definitely delivers in that department. However as usual there are numerous problems with the script and story, it’s senseless as usual, but not as annoying as "Revenge of the Fallen", the dialogue is weak, but at least it’s not mindbogglingly stupid. Also the Autobots and even the Decepticons have more of a personality than they used to. Grimlock is a fantastic addition in this film, but I would have liked to have seen a bit more of him.

For those who didn’t care for Michael Bay’s past Transformers films, you probably won’t like this because it has even more mindless extravaganza action packed scenes, just like the other films did. However audiences who are game to board the extravagance train will find that Age of Extinction hits all the notes that a Transformers movie ought to. So if you didn’t like any of the other past Transformers movies, don’t bother watching this cause you’ll probably won’t become fan after this. If you liked the other ones then you’ll most likely be in for a fun ride like I was.