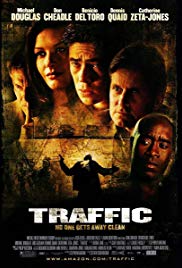 Storyline:
An intertwined drama about the United States’ war on drugs, seen through the eyes of a once conservative judge, now newly-appointed drug czar, his heroin-addicted daughter, two DEA agents, a jailed drug kingpin’s wife, and a Mexican cop who begins to question his boss’s motives.
User Reviews: TRAFFIC / (2000) ***1/2 (out of four)

"Traffic" caught some of the most gratifying praise in the year 2000. Does the production live up to its expectations? To some extent. It is not a movie to take the family to on a Sunday afternoon, nor is it an "entertaining" popcorn extravaganza. "Traffic" is one of the best films of the year, but it is not a movie for everyone. I had my fair share of disappointments, and I think many audiences will walk away unsatisfied by its documentary-like style and unusual structure. "Traffic" is still a great achievement in filmmaking and visual style-worthy of some, but not quite all, of its great acclamation.

The movie’s director, Steven Soderbergh, won Oscar nominations for both of his movies last year: "Erin Brockovich" starring Julia Roberts, and this epic about the never ending war on drugs. That first film is entertaining and charming, but this is far more complex in its story. There are actually three separate plots here, the first detailing two Tijuana cops (Benicio Del Toro and Jacob Vargas) who find themselves in the middle of a corrupt police force, working for Gereal Arturo Salazar (Thomas Milian), Mexico’s top drug aggressor who wants to shut down the Tijuana drug cartel by capturing a notorious assassin (Clifton Collins Jr.).

The second story has Michael Douglas as a conservative Ohio State Supreme Court Judge turned nation’s new drug czar. He has a savage job, as we can see, but it is even more difficult being the father of a 16-year-old daughter (Erika Christensen), who gets straight A’s in school, but uses heavy drugs and eventually prostitutes herself for them when the supply runs low. Amy Irving plays her mother whom herself tried every kind of drug in the market when she was young and thinks her daughter should be given more freedom in this area of maturing. Her husband strongly disagrees.

The third story is a bit more complicated, dealing with the reactions of a typical pregnant homemaker, Helena (Catherine Zeta-Jones), when she finds out her husband, Carlos Ayala (Steven Bauer), is not an executive, but a high-powered drug lord. He is taken into custody when undercover DEA agents Montel Gordon (Don Cheadle) and Ray Castro (Luiz Guzman) crack a disreputable drug cartel led by Juan Orbergon (Benjamin Bratt). Helena, with the help from her attorney (Dennis Quaid), must deal with the pressures by her husband’s demanding enemies, as well as the DEA. Miguel Ferrer plays the middle-run drug dealer who is captured by the DEA agents and wants immunity for testifying against the high-powered bosses for whom he works.

"Traffic" does not have the harrowing, compassionate, hard-to-watch tone that "Requiem for a Dream" had earlier last year, which also contained three different although parallel stories. That film depicted drug use as personal success followed by desolation and punishment. "Traffic" doesn’t really make drugs personal, although the plot featuring Michael Douglas’ drug addicted daughter touches on the idea, and the actors do a good job of making the character’s attitudes hit home, but the film is more about the war on drugs within America as a country, and how it is a battle not likely to be won anytime soon. The picture does not capture the feeling of the characters like "Requiem for a Dream" did with its highly elaborate styles and camera effects. "Traffic" just isn’t as emotionally profound as the much more worthy "Requiem for a Dream."

Steven Soderbergh does manage to capture an inciting style with grainy, high contrast photography exploring the atmosphere of Mexico. He pays attention to even the smallest scenes. Take a scene where the Benicio De Toro character encounters a young married couple who complain about their stolen car. Many directors would have left this scene on the editing tables, or paid less courtesy to it because it is not as important as many other scenes. He gets the right mood, confusion of the characters, all while furthering the development of De Toro’s character. Each individual scene here is interesting on its own merit.

A top notch cast contributes superb performances in "Traffic." We expect and receive good performances from actors like Michael Douglas, Amy Irving, Dennis Quaid, Benicio Del Toro, and Albert Finney, but there are also some newcomers who shine with their material, including Erika Christensen and Topher Gracer. The actors really hold our attention, and with a running time of nearly 150 minutes, that is imperative. This film is greatly constructed and perfectly cast-it is the kind of movie in which you walk out of the theater wanting to discuss your opinions about it.