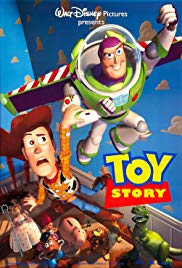 Storyline:
A little boy named Andy loves to be in his room, playing with his toys, especially his doll named “Woody”. But, what do the toys do when Andy is not with them, they come to life. Woody believes that his life (as a toy) is good. However, he must worry about Andy’s family moving, and what Woody does not know is about Andy’s birthday party. Woody does not realize that Andy’s mother gave him an action figure known as Buzz Lightyear, who does not believe that he is a toy, and quickly becomes Andy’s new favorite toy. Woody, who is now consumed with jealousy, tries to get rid of Buzz. Then, both Woody and Buzz are now lost. They must find a way to get back to Andy before he moves without them, but they will have to pass through a ruthless toy killer, Sid Phillips.
Written by
John Wiggins
User Reviews: Andy’s toys live a reasonable life of fun and peace, their only worries are birthdays and Christmases, when new toys could easily replace those already there. One such birthday Andy’s top toy, Woody the cowboy, finds himself in direct competition with Andy’s new Buzz Lightyear doll. When rivalries boil over Woody tries to hide Buzz down the side of the bed but accidentally pushes him out the window, the other tops expel Woody, and he leaves with no choice but to find Buzz and return him to the house. But with only two days before Andy moves house, time is of the essence.

Given how often the same mix of animation, wit, jokes and kids humour has been used since Toy Story (Ice Age, Monsters Inc, Bugs Life) it is easy to forget how refreshing it was when it first came out. I have just watched it again and it is dating a little in comparison to more recent twists on the formula. It seems each one has to be sharper and have more references etc in the background. However it is still very funny and deserves praise for being the first of a successful formula.

The plot is simple but effective and actually has genuine drama and excitement to it. The main story is fun but the degree of character development is what really shores it up. The conflict between Buzz and Woody is taken deeper than this and, when confronted by the truth of his status as a toy, Buzz’s turmoil is very real as opposed to him being a cartoon character and nothing more. Despite the two strong leads there is a real depth in the support cast. They may not actually have that many lines, but they have all the funniest lines. Most of the `adult’ wit comes from the Potato Head, dinosaur, the pig and slinky dog. They are funny and are very well used. In fact the majority of this humour and plot will go right over kids heads.

Looking back on it, I do feel a cynical edge on it in so much as this film must really have helped sales of the toy companies in the film. It’s hard not to see the marketing department standing behind this film rubbing their hands. However the actual product is so wonderfully fun that I forgot this quickly. The voice work is excellent and the characters match the actors. Hanks is good as Woody and Allen has a good B-movie type voice for Buzz. Varney, Ratzenberger, Ermey (doing his usual), Rickles and others are all really good in the support roles and, probably, come out as the favourite characters for adults.

Overall this is a classic film that will appeal to adults as much as to kids (if not more). A good plot and a really sharp script make the already short running time fly by. The only downside is that your kids will want you to go out and buy the damn things!

Storyline:Master Oogway always said there are no accidents, but fate still takes unusual directions when Po is around. This is especially true in his youth when he is looking for his calling even as the great menace n...