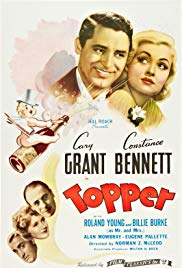 Storyline:
The funloving Kerbys, stockholders in the bank of which henpecked, stuffy Cosmo Topper is president, drive recklessly once too often and become ghosts. In limbo because they’ve never done either good or bad deeds, they decide to try a good one now: rehabilitating Topper. Lovely, flirtatious Marion takes a keen personal interest in the job. Will Topper survive the wrath of jealous ghost George? Will Mrs. Topper find that a scandalous husband isn’t all bad?
Written by
Rod Crawford <[email protected]>
User Reviews: A dead couple is determined to loosen up their friend in "Topper," a 1937 comedy starring Constance Bennett, Cary Grant, Roland Young, and Billie Burke. Cosmo Topper (Young) is a bank president whose wife (Burke) has him on a strict schedule and, though unhappy, Cosmo complies.

When bank stockholders George and Marion Kirby are killed when their car crashes into a tree, the two become worried about what St. Peter will have to say to them. They were, after all, two fun-loving, hard-drinking, partying kooks. They decide they must do a good deed before approaching the pearly gates so they make loosening up Topper their project.

This is a wonderful film that inspired the Leo G. Carroll TV series with real-life marrieds Anne Jeffreys and Robert Sterling as Marion and George. The special effects in the 1937 film are groundbreaking and ingenious. Mores have changed over the years – driving drunk is no longer acceptable. I’m afraid George and Marion would be heartily disapproved of today. Nevertheless, they’re a gorgeous, glamorous couple and the real stuff of fantasy. Bennett only has a couple of years of big stardom left and, with his second billing, Cary Grant is still on the ascent. They’re both hilariously madcap, Grant blasting into a stockholders’ meeting and trying to take notes, and Bennett flirting with poor Topper in her silky voice.

Roland Young is the perfect Topper – henpecked, confused, and a nervous wreck. He’s a man dying to break free of his shackles, and he’s always envied George and Marion’s lifestyle, even though it killed them. His frustration and unhappiness make him sympathetic, and the audience is with him all the way.

Very enjoyable, with some effects that were eye-popping in 1937. Don’t miss "Topper." It’s a classic.

Storyline:A film about fragility; about a man obsessed with photographing the accident who discovered that the fate of others was his way of connecting to life. When does the image of the accident become the object of...

Storyline:A stranger arrives in a little village and soon after a mysterious sickness starts spreading. A policeman is drawn into the incident and is forced to solve the mystery in order to save his daughter.User Revi...

Storyline:A group of parapsychologists, as well as a skeptical cop, are terrorized by a Satanic ghost in a bed-and-breakfast.User Reviews: