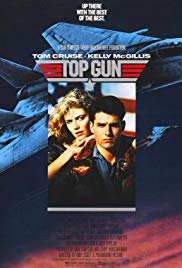 Storyline:
Code-named “Maverick”, Pete Mitchell, the impetuous daredevil Navy-pilot ace, is accepted into Miramar’s elite Fighter School, also known as “Top Gun”. There, as the impulsive pilot competes with the best of the best, not only will he meet Charlie, the flying school’s curvaceous astrophysics instructor, but also the brilliant and highly competitive fellow student, “Iceman”, with whom right from the start, he will engage in a reckless contest. As Maverick is haunted by his father’s mysterious death, will he be able to suppress his wild nature to win both the prestigious Top Gun Trophy and the girl?
Written by
Nick Riganas
User Reviews: Absolute cheese on a stick, but Top Gun proves that that’s not always a bad thing. This movie’s got everything – an arrogant prodigy who’d be out on his arse if he wasn’t so good, a sensible, uglier best friend, a love interest (although she’s a bit of a mess), an arch nemesis and his dumb sidekick, a few cool high fives and catchphrases, an emotional death scene, a euphoric victory scene and of course, some unforgettable action scenes. What more could any red-blooded child of the eighties ask for!? And anyone born around 1980 will remember how everyone was doing that double high five and saying ‘talk to me, goose’ to the kid next to them in class. Certainly one of my all time favourites.