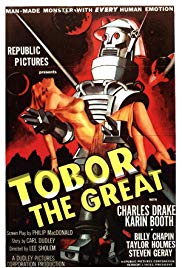 Storyline:
As projected here, a thinly-disguised NASA, working with nuclear rockets, is ready for manned flights in the mid-fifties…but Dr. Ralph Harrison doesn’t think so, and resigns in protest. Colleague Prof. Nordstrom promptly enlists his aid in developing an alternative robot Spaceman! Naturally, foreign spies are keenly interested… Uses documentary footage of early space research.
Written by
Rod Crawford <[email protected]>
User Reviews: Baby boomers of a certain age may recall being entertained, back in 1965, by the latest Japanimation product at that time, a TV program called "Tobor the 8th Man," which had its origins in a manga comic in 1963. But almost a full decade before the 8th Man’s initial appearance, another Tobor was thrilling baby boomers in America’s movie palaces, via 1954’s "Tobor the Great." In this surprisingly likable film, the elderly Prof. Nordstrom builds a mechanical simulacrum, operated telepathically; a robot designed to take the place of a human being in the first, ultrahazardous rocket voyage into space. The professor and his 11-year-old grandson, Gadge, soon become the targets of foreign spies, however, so it’s a good thing that Tobor is prepared to meet ALL emergency situations! Anyway, "Tobor" is a perfect film for adults to watch with their kiddies. The film has been well directed by Lee Sholem (the man responsible for 1951’s "Superman and the Mole-Men"!) and features some very competent acting (especially by Taylor Holmes as the professor and Charles Drake as his assistant) and a compact (the whole film runs only 77 minutes in length), fairly intelligent script; don’t believe the wet blankets at Maltinville who claim these latter two aspects are "terrible." As far as Tobor itself is concerned, comparisons to Robby the Robot, in 1956’s "Forbidden Planet," are hard to avoid. Tobor might be a taller and thus more imposing creation, which is not to say cooler looking. And lacking the power of "speech," it doesn’t have 1/10 the personality of Robby. Still, it is a wholly endearing construct, and the final shot of the big galoot at the controls of Earth’s first space rocket is fairly touching. In all, "Tobor" is good, lighthearted sci-fi fun, and demonstrates that a film doesn’t necessarily require the resources of an Industrial Light & Magic complex to fashion a memorable robotic character. Tobor might not be Robby or R2-D2, but it sure is a good dude to have on one’s side when the chips are down!

Storyline:The story of CARGO takes place on rusty space-freighter KASSANDRA on its way to Station 42. The young medic LAURA is the only one awake on board while the rest of the crew lies frozen in hibernation sleep. I...