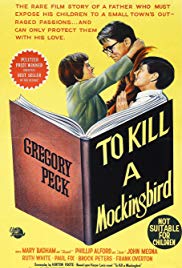 Storyline:
Small-town Alabama, 1932. Atticus Finch (played by Gregory Peck) is a lawyer and a widower. He has two young children, Jem and Scout. Atticus Finch is currently defending Tom Robinson, a black man accused of raping a white woman. Meanwhile, Jem and Scout are intrigued by their neighbours, the Radleys, and the mysterious, seldom-seen Boo Radley in particular.
Written by
grantss
User Reviews: I’m surprised that there aren’t more comments on Peck’s amazing depiction of Atticus Finch, the father. In this era of absent fathers, preoccupied fathers, abusive fathers, immature fathers, etc, etc, Peck’s Finch gives us all a soothing view of the best of fatherhood. Where else do we get to watch a man sit up with his ill child, stand firm in his convictions, show patience and gentleness with his children, demonstrate an appropriate level of humility, communicate righteous values to his children, and give his children a picture of integrity to emulate. Every time I view this film I wonder how Peck was able to pull this off. Every time I view this film, it gives me hope for the future of fatherhood.