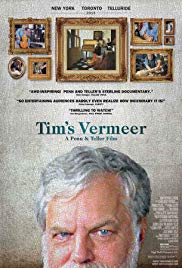 Storyline:
Inventor Tim Jenison seeks to understand the painting techniques used by Dutch Master Johannes Vermeer.
User Reviews: If you, like me, enjoy technology and creativity. This is a must see Documentary about a man who set off to make a ‘Vermeer’. With no particular skills, but with time and money to spend, he reinvented and discovered the Artist’s way. For me the ‘revealing’ of Vermeer was far from a disappointment. Instead for me it brings Vermeer straight into the age of Enlightenment.

Art, at it’s best for me is always a combination of smart and ingenious, it has to do with craftsmanship, with guts and persistence and a bit of Eureka. During the Age of Enlightenment in the Netherlands of the 17th Century, the two disciplines – Science and Art – just had to meet. As Jenison points out in the Documentary, this is exactly what happened here. But maybe there is even more..

Born in 1632, Vermeer shares the same birth year with another famous man called Baruch Spinoza. Spinoza worked in The Hague, a city that is only a stone throw away from Delft, which being the city where Johannes Vermeer lived, worked and died.

As Tim Jenison so brilliantly shows, lenses and mirrors play an important role in the work of Vermeer. Not only on his paintings, but also in the way he produced these paintings.

Wouldn’t it be a great thought that Baruch Spinoza, who worked as a lens maker for a living, contributed as such to the paintings of Johannes Vermeer. Maybe they even talked about light, perspective and geometry during the tedious grinding of the lens. And that picture just made my day 🙂