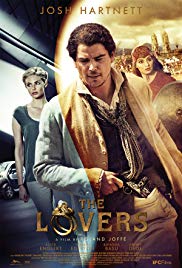 Storyline:
Great Barrier Reef, 2020. After a dangerous dive to save his wife Laura trapped while exploring an colonial British merchant ship wreckage, Jay Fennel, a rugged and attractive marine archeologist lies brain dead in a Boston hospital. Fennel’s dream-like coma takes us back in time to Pune, India in 1778. The British East India Company is invading the palaces and a young captain named James Stewart, who bears a striking resemblance to Fennel, is about to embark on a dangerous mission. Along the way he encounters murder, deceit, betrayal and revenge. He falls deeply in love with an Indian She-warrior named Tulaja, an impossible love which he must fight for. Only the power of a ring can transcend time and save a life.
Written by
Anonymous
User Reviews: Really disappointed with this Josh Hartnett is a great actor and has been great in Penny Dreadful But this is not a film for him, Terrible story line and low budget … How did the ring end up in a ship for start. Josh Hartnett must have signed for this very drunk at a party me thinks to do this when his acting skills are so better than a film like this. Please Josh don’t put us through this again!!!! Lets have more Black Hawk Down and Penny Dreadful as he is totally better than this production lots of silly mistakes and why make it worse by trying to make him Scottish some people can pull off accents but he cant he sounded a cross between a posh Irish/ Scottish man, Who’s idea was that? So overall very UN impressed… Not again please JH

Storyline:Da-eun lives a happy life with her single father, a man who sacrificed everything in his life for her. She was a daughter who loved her father very dearly. However, their relationship is about to take an une...

Storyline:On May 5th, 1862, a few thousand Mexican soldiers put their lives on the line against the world's largest and most powerful army in one legendary battle for freedom and for Mexico.User Reviews: I've read qui...

Storyline:A cross-cultural romance and an intercultural friendship between Ram, Rosy and Anu goes through a roller coaster ride of love, laughter and misunderstandings.User Reviews: An excellent movie will brilliant d...

Storyline:A coming-of-age story of a girl who experience life through misadventures & dating apps.User Reviews: The producers should have rather fed undernourished children, than to make this bad movie. It is an u...

Storyline:The discovery of the mutilated body of a mentally challenged young mother begins a journey into madness that is so unbelievable the mastermind behind the crime ultimately got away with murder. Revealing for ...