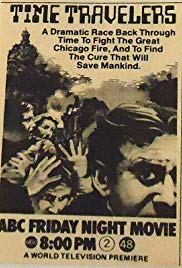 Storyline:
In 1976, there’s an outbreak of a disease that no one has seen before. All what they know is that resembles a disease that existed at around 1871 in Chicago, and that a Dr. Henderson was able to save most of his patients but the Chicago Fire destroyed his records. Dr. Earnshaw the doctor looking for a cure was approached by a man, Jeffrey Adams, who believes that he could help him. It seems that a Dr. Amos Cummings has perfected the art of time travel, and the plan is for Earnshaw and Adams to go back to 1871 and learn how Henderson cured his patients. But a glitch in the machine’s computers sends them the day before the fire not four days as intended. And when they meet Henderson, he says he doesn’t know how his patients survive. So they go throw his papers and analyze what he uses to treat them to find out.
Written by
<[email protected]>
User Reviews: Okay, Irwin Allen made this film after his enormous success of the Towering Inferno. It stands to me as a really good TV movie. the plot is some what strange, but you loose track of that after you really get into the movie. You watch it and are amazed at how fine the acting is. The characters are loosely based on the original Irwin Allen TV series the Time Tunnel (1966). I recently bought the series on DVD and was glad to see this was included, I can only hope that they will include other telefilms of Allens with the releasing of his other series on DVD. This film is watchable with the whole family and is worth watching.