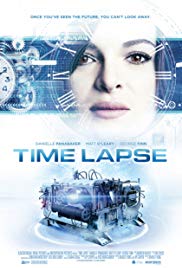 Storyline:
Three friends discover a time machine which takes pictures of the future. They begin to use it to win race bets and everything goes fine till one gets greedier than another. They begin to lose faith in each other giving a sense of backstabbing as uglier truths unfold in the photos and the situation soon gets out of control.
Written by
Keith Francis
User Reviews: This movie was a nice relief from mind-numbing Hollywood films. It’s not an arty-farty indie movie, it’s just a good thriller with more believable dialog and characters than most Hollywood films.

If you enjoy thoughtful time travel or sci-fi movies, definitely give this a go.

The concept is great and could lend itself towards a sequel with different characters. It’s rare that I will bother to rate a movie on IMDb, but now and again I come across a thoughtful movie that stands out from the usual stream of cliché films.

I think the movie poster is a bit of a letdown though. To be honest it reminds me of a 90s straight-to-VHS movie. Anyway, ignore the cover and give this movie a shot. (EDIT: the poster I was talking about had a green and black tone to it, it has since been changed and looks much nicer)