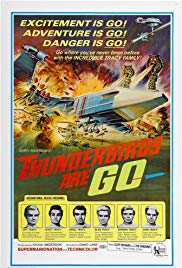 Storyline:
Zero-X, a manned exploration mission crashes during lift-off on its maiden flight. Two years later an investigative committee finally concludes sabotage, and decides to call on the services of International Rescue to oversee security at the impending second launch. The second Zero-X successfully reaches its destination, but encounters unexpected hazards, ultimately leading to another call for assistance on its return to Earth. International Rescue respond, and once again Thunderbirds are GO!
Written by
Raj Rijhwani <[email protected]>
User Reviews: I have just been watching this movie and felt that as the only other comment on it was some excuse for a review by some person with rather questionable views above, i thought i’d lend my opinion (after all, i couldn’t be any worse). "Thunderbirds Are Go", the first full-length feature film version of Gerry & Sylvia Anderson’s top fantasy series of the 60’s is quite a landmark indeed.

Landmark (?), i hear you ask. Well, yes. The whole Thunderbirds series was nothing but pure Hollywood at it’s best; and this movie – as well as the one that came afterwards – only served to expand that tradition, whilst still maintaining the elements and formula that made it famous in the first place in 1965. The movie, has style, wit, incredible drama, and for its time, an astonishing view of the mid-21st.Century. Of course, most of it was pure fantasy and could never ever be real. The amount of times i’ve heard it said that the Thunderbirds machines couldn’t even get off the ground is enormous. But that’s ok, it’s fantasy. And what good would a decent adventure be, if it didn’t transport you out of reality and into a fascinating fantasy world where everything was different! As i say, the best Hollywood tradition. And of course, what made these productions so very special (at least to us Brits), was that 1. it was British, and 2. the heroes were all Puppets! Unbelievable to this day, i know. Yet as we are soon to be confronted by a million dollar live-action Thunderbirds epic, i think it is true to point out, that the main charm in the Thunderbirds adventures WAS the fact that they were acted by Puppets. So charming, so much a throwback to our own innocence (let alone a throwback to a much more innocent time when it was made); how could that be improved upon? The model work and special effects, especially the Zero-X Space-probe, are all extremely effective (as you would expect from Derek Meddings), and whether you are a Thunderbirds fan or not, it will be hard to knock this piece of Movie/TV history off it’s perch. This movie being years ahead of its time, a great piece of fun and a fine addition to a classic series.

Storyline:Recently diagnosed with a terminal illness, a man returns home to Australia to die in the wildness. His plans become complicated when he meets a young man and decides to take him under his wing.User Reviews:

Storyline:Starblack is a hero who dresses in black and his face is covered by a black scarf and he carries in his shirt a black star, which he always leaves at the scene of his enterprises, as a symbol of justice. Sou...

Storyline:After being caught in a storm in the south seas, several teenagers and thief arrive on an island where natives have been enslaved by a terrorist organization. They also discover a sleeping Godzilla and deci...

Storyline:Cheng Pei-pei plays Golden Swallow, a fighter-for-hire who has been contracted by the local government to retrieve the governor's kidnapped son. Holding him is a group of rebels who are demanding that their ...

Storyline:A wounded criminal and his dying partner take refuge at a beachfront castle. The owners of the castle, a meek Englishman and his willful French wife, are initially the unwilling hosts to the criminals. Quick...

Storyline:In this feature-length film based on the User Reviews:

Storyline:Colonel Stok, a Soviet intelligence officer responsible for security at the Berlin Wall, appears to want to defect but the evidence is contradictory. Stok wants the British to handle his defection and asks f...